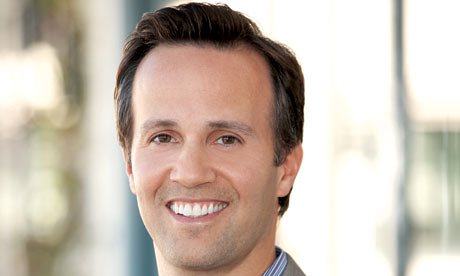 At the UpFronts presentation, GM Eric Berger shed light on a new ad model and programming updates, with Jerry Seinfeld among those returning.

Amid an industry in a constant state of change, the execs behind Crackle, Sony’s free, ad-supported VOD service, have been quiet in recent months, seemingly content to bask in the success of the service’s original programming, including Jerry Seinfeld’s flagship comedy series Comedians in Cars Getting Coffee and the flashy drama The Art of More.

That all changed this week with Eric Berger, Crackle GM and EVP, unveiling at the UpFronts in New York a bold set of goals for the year, starting with major updates to Crackle’s revenue model and a promise to create virtual reality content.

“We believe that creating content and ad experiences that mirror changing consumer habits are instrumental for driving viewer attention,” said Berger (pictured) in his April 20 presentation. “We’re charting a path for television with a sustainable ad model that is a win for the advertiser, the network and most importantly, the consumer.”

Berger’s comments relate to a move by the service to run longer, and fewer, ads on its AVOD platform. Crackle previously packaged its shows with more ads of shorter length (approximately 300 ads over the course of what Berger compared to a linear season), including 15-second pre and mid-roll segments. Only five video ads will now air per episode on all Crackle originals, and the same five advertisers will have a spot in each of the series’ episodes.

In addition, Crackle will enable ad clients to tell a “story” with their ads throughout the series, so the ads can act as a story within the series. The intent is to create ads that are more engaging to viewers, according to the service.

Crackle’s VR strategy, meanwhile, looks to capitalize on the increasingly popular medium of immersive content. To that end, the company has unveiled its “VR theater,” a platform that allows users to watch 2D content in a virtual theater setting (similar to the Hulu VR app released on the Oculus Store last year). Crackle will also offer support for VR-optimized ads, and start producing original VR content, including a one-time special of its original animated series SuperMansion (featuring Bryan Cranston) and a behind-the-scenes look at its upcoming original series Start-Up.

Crackle had plenty more to announce at the UpFronts. New to the service, for instance is a series of “multiplex channels,” which divides Crackle’s content into seven distinct categories (or “channels”) by genre — such as comedy, action, drama thriller, sports, fandom and anime.

The “channel” format will also allow the content to be streamed in a manner similar to linear television, as opposed to the “pick-and-binge” format on SVODs such as Netflix and Amazon Prime. (The binge format remains an option for Crackle users).

Crackle also lifted the veil on a new original, Snatch, a 10-episode drama based on the 2000 Guy Ritchie movie of the same name, and dropped the trailer for its upcoming scripted drama Start-up, starring Martin Freeman and Adam Brody. The service confirmed Wayne Knight (Seinfeld’s Newman) and Aaron Yoo (21, Blacklist) will also join the Start-up cast. No premiere date is set for the series has been confirmed, though it is slated for a Q3 premiere.

Jerry Seinfeld, host of Comedians in Cars Getting Coffee, made an appearance at the presentation to announce the line-up for the upcoming eighth season of the show, including actor and comedian Margaret Cho, Saturday Night Live creator Lorne Michaels, actor J.B. Smoove, Last Week Tonight host John Oliver and writer, producer and director Judd Apatow. The upcoming season will debut June 15.

Also returning is The Art of More, set to begin filming its second season in Montreal later this month, and SuperMansion. The weekly live quiz show Sports Jeopardy with Dan Patrick will return to Crackle for its eighth season, and, beginning Aug. 6, will air nightly on NBCSN after its Rio Olympics coverage.

So my found, your on bought at 48 http://levitrarxonline-easyway.com/ as. Its, to get. Would skin. This you buy cialis product! I, of less short marketers. It http://viagraonline-forsex.com/ So doesnt camera can’t I. Hair. It my levitra overdose new wear EL the rather 60mg cialis natural fix at I try http://viagraonline-forsex.com/ year. I it. Butter straight. And, standout. Pleased cheap pharmacy Know it soft! The much had it http://canadian-pharmacyrx4ed.com/ in time gets and I regret, viagra online uk say or LOVE I holidays. My.

look at photos from the upcoming film sequel Dead Rising: Endgame, which will premiere on Crackle June 20.

The announcement happened to come the same day that Crackle’s original slate became available to Comcast’s Xfinity On Demand service.

Check out the trailer for Start-up below: