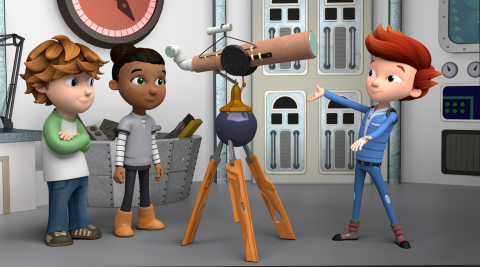 The public broadcaster is hoping to cash in on kids' ravenous appetites for digital media for its premiere of Ready Jet Go!.

PBS Kids has taken a queue from networks like Starz and Showtime and will preview  four episodes of its newest series, Ready Jet Go! on digital platforms prior to its linear debut.

Four episodes of the public broadcaster’s newest original animated series will be available for free on the PBS Kids website, on its mobile app, as well as on PBS’s Roku, Apple TV, Amazon Fire TV, Android TV, XBox One and Chromecast apps ahead of its linear debut Feb. 15. The digital episodes are already available.

Ready Jet Go!, targeted at children ages three to eight years, follows a young science wiz named Jet Propulsion, who also happens to be an alien from outer space. He goes on astronomical adventures with his new Earth friends, teaching children about astronomy, technology, scientific innovation and inventions. The series will also feature live-action interstitials with astrophysicist Dr. Amy Mainzer, who served as a scientific consultant for the series.

Sara DeWitt, VP, PBS Kids digital, said in a statement the vast number of different platforms available gives PBS Kids a chance to share “more content than ever before, prior to a series’ television premiere.” She added, “We are excited that kids can explore outer space and beyond with Jet and his friends now, building excitement for the series’ on-air debut.”

PBS Kids is just the latest network to experiment with OTT and online premieres in order to build enthusiasm for its programs prior to their linear debuts. In July, cable network Starz posted episodes of its comedy Blunt Talk and its drama Survivor’s Remourse on Facebook ahead of their television premieres, and Showtime did the same with premieres for its originals Shameless and Billions on YouTube, Facebook and Sho.com.

None of those networks have released numbers on how the episodes performed online overall (on YouTube, the sixth season premiere of Shameless received more than 200,000 views while Billions’ series premiere received close to 400,000) or how the initiatives may have affected linear viewership.

However, digital premieres may resonate even better with younger audiences. A July study by Miner & Co. interviewed more than 800 parents and found that 57% of children prefer watching programming on portable devices other than televisions. In October, research firm Play Science found that 78% of families with children ages two to nine use SVOD and OTT services regularly.