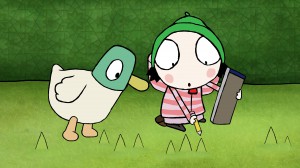 The pubcaster's children's programming will roll out starting May 5 and be translated to Spanish and Portuguese.

BBC Worldwide is expanding the reach of CBeebies in Latin America through the release of a new mobile SVOD app that will stream its core series like Charlie & Lola, Sarah & Duck and The Numtums in Spanish.

The mobile offering will be available for both iOS and Android devices with a seven-day free trial, after which a U.S. $4.99 monthly subscription fee kicks in.

Launching in Mexico on May 5, the app will subsequently expand to the rest of Latin America, including Brazil (with content dubbed in Portuguese) and the U.S. Hispanic market.

Along with offering full episodes of CBeebies shows in Spanish, the app features a roster of educational games. For adults, it offers articles about parenting and early childhood education.

Developed by Playground Serious Fun for BBC Worldwide Latin America, the app launch comes just a few weeks after BBC Worldwide announced a collaboration with Shanghai Media Group to strengthen its presence in China by moving the CBeebies brand into consumer products and e-commerce.