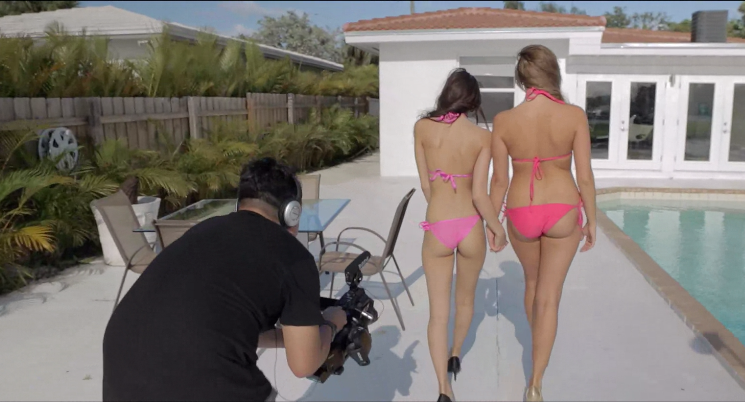 CNE: “We didn’t want to do something that was salacious”

It also one ripe with opportunities for titillation and sensationalism. HBO has taken advantage of those opportunities with its feel-good, porn-y looks at the sex industry in documentary series such as Real Sex and Cathouse, and still managed to regularly earn armloads of Emmys for its more traditional non-fiction programming.

But CNE isn’t going there.

With Belle Knox, “we didn’t want to do something that was salacious,” says Michael Klein, EVP of programming content and strategy for CNE. “We present an objective point of view about her life.”

Belle Knox was made in the spirit of previous CNE digital docs such as The Grind, about NFL star Brandon Marshall’s struggles with Borderline Personality Disorder, which debuted last week on The Scene, and GQ’s Emmy-nominated Casualties of the Gridiron, about head injuries in the NFL.

“These are really provocative stories and characters and worlds people are curious about, and that’s what we really want to see in any of the documentary series that we do on The Scene,” Klein says. “We’re able to really immerse ourselves in these worlds and there’s a real connection with the audience, because it’s the start of a conversation.”

In Belle Knox producer Peter Savodnik’s early conversations with Weeks, he assured her that he would take an honest approach to her story that wouldn’t leave her feeling used. He also told her that “that the only way this works is if we spend a lot of time with you to the point that we’re annoying and you want us to go away,” he says. “We spent several days with her, first in North Carolina, then at work in Florida… (and) in Atlantic City. In that time, we managed to get a sense of who she really is, as opposed to something more superficial.”

“I can’t say that I found anything sexy about it at all,” says Savodnik, an author and journalist who has written for such publications as The Atlantic Monthly, New York Times Magazine, GQ, The New Yorker and The Washington Post. “It was ultimately weird and a little unnerving and discomfiting. I can’t say I have any desire to go back into it anytime soon.”

Savodnik was infinitely more impressed with Weeks herself.

“The thing about Miriam is she’s really, really honest,” says Savodnik, who currently has half a dozen other short-form docs (or “shortreals,” as he calls them) in production with his company Stateless Media. “There was much less defense, much less pretending and dissembling, which you encounter frequently and often unconsciously with subjects. One of the things that I was most impressed by was her willingness to criticize herself and acknowledge that there were contradictions in her thinking. And that made for some really great storytelling and a much more exciting reporting process”

Editor’s Note: In the original version of this article, Peter Savodnik was also listed as director. The director of Becoming Belle Knox is Phillip Van.