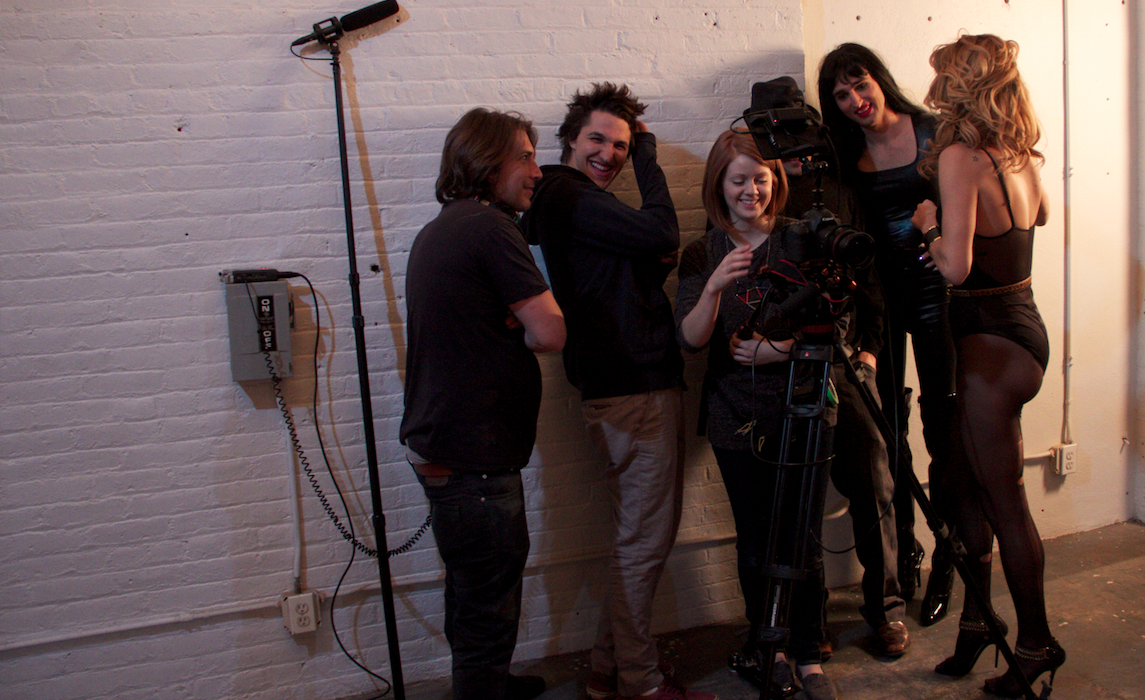 BFD Productions' Tony Castle and Roxy Hunt discuss the upcoming season two launch of their web series about self-involved Manhattanites, and their decision to move the show from Logo TV to YouTube.

Vicky & Lysander, an online video series with a cult following, is both a passion project and a snarky goof, equally amusing and willfully inappropriate.

Its second season starts Feb. 18 on YouTube  — it’s where you can now also find the entire first season, which last year streamed on Logo TV.

Each episode, just four or so minutes long, is a quick farcical look at the title characters (an “effeminate man and his deluded wife”) as the Internet Movie Database puts it, and their circle of eccentric acquaintances and friends.

The show is produced by Roxy Hunt and Tony Castle, who head BFD Productions, in Greenwich Village. Along with Walker and Cardasis, they also are directors of the annual L.E.S Film Festival, which will unspool for its fourth year this June, on Manhattan’s Lower East Side of course. L.E.S.’s motto is “More For Less at the Movies,”  and its hipster vibe has attracted well-known downtown talent such as Susan Sarandon and Willem Dafoe.

True to its “More For Less” roots, Vicky & Lysander is shot outside on Manhattan streets and inside real locations. The ultra-low budget production is staffed by BFDers, most of whom worked for “laughs, pizza and beer,” says Castle.

“When we budgeted out what it would cost to make season two, we were looking at something around $20,000. We absolutely did not have those funds so we find creative ways to do it on the cheap,” he tells StreamDaily.  In reality, they invested about $2,500 in cash, which means promotions are done through partnerships on YouTube, their L.E.S. network and social media — in January, the show even got some Twitter love from RuPaul. 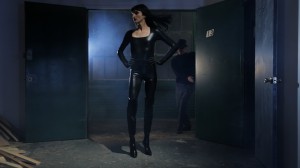 Developing a digital series has some side benefits too, such as creating a really strong team for their client work.

“It could be surprising to show some clients a shot of Jenny, a latex clad transsexual superhero (right), kicking in a door, but we’re proud of how it looks and it shows clients what we can do and maybe a little about who we are,” Castle says. “We’ve seen more and more clients interested in our narrative chops where previously we had produced a lot of doc stuff.  We love doing both, but when you get to dream up crazy situations like this for a client we’re pretty excited.”

The second season will follow the format of the first, but will add “some audio commentary and behind-the-scenes stuff,” according to Hunt. 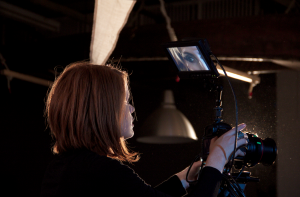 Castle, Hunt, Walker and Cardasis shot the entire first season, Hunt says, then they “started pitching it to different networks.” She explains the second-season move to YouTube in terms of their desire to reach a bigger audience. “Logo is great,” Hunt (pictured left) says, “but they have a very niche audience.”

When their contract with Logo expired at the end of last year, they moved season one to YouTube as well.

The key difference in the distribution, besides the fact that the show now airs internationally (season one didn’t air in the U.K. on Logo) is also control: on YouTube they can have a conversation with their viewers, Castle says. “We can respond to what people are asking for in the comments, and best of all, we can collaborate with other YouTubers to cross promote.” They will likely also be putting to use some new audience-building tricks, learned at YouTube’s Next Lab development group, which they took part in last year. Right now they do not know how many views the show received during the first season, as Logo has not released the figures to them, Castle says.

Vicky and Lysander first appeared in a live stage show, what Hunt calls an “interactive art piece,” put on by Walker and Cardasis. “After I saw the show, I just kept thinking, ‘God, I wish I could experience that again.'”

And because the four of them knew each other, it happened. Before long, “in between other jobs,” they were shooting the episodes Walker and Cardasis had penned, Hunt recalls.

When they were done, they “pitched it around,” thinking it wasn’t going to go anywhere, and then, “all of sudden, Logo was like, ‘We’ll buy it,’ and we were like, ‘Wow!’ Totally unexpected, that was definitely not the goal. The goal was just to make it.”

The money they made from the first season was “big enough to get excited about it; small enough that we felt it was alright to go to YouTube and reach a much-bigger platform.”

Season two “ramps up the production value,” Hunt adds, “but with really no more money.” And no more promotional budget either. Still, they’ve managed to include a car chase in the new season.

That was a promise they seem to have kept.