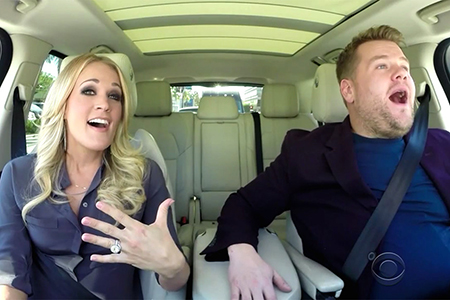 The service has secured a first-window licensing deal with CBS Television Studios for a series based on the popular late show segment.

Apple Music has secured an exclusive first-window licensing agreement with CBS Television Studios to be the global home for Carpool Karaoke.

The CBS Television Studios and Fulwell 73-made series, which is based on CBS’ The Late Late Show with James Corden (pictured) segment by the same name, will contain 16 episodes in which celebrities and an yet-to-be-named host will visit locations that hold meaning to each star, while singing along to popular tunes from their personal playlists.

Episodes of the series will exclusively become available each week to Apple Music subscribers.

The original late night segment has made big inroads among shareable content online, amassing more than 850 million views on YouTube since launching one year ago. The digital series has featured such pop superstars as Adele, with 119 million views; Justin Bieber; One Direction; Elton John; Jennifer Lopez; Stevie Wonder; and Gwen Stefani, as well as U.S. First Lady Michelle Obama.

CBS Studios International announced it would be shopping the format internationally in May.

A host and premiere date for the series have yet to be announced. Production is scheduled to begin shortly.

“We love music, and Carpool Karaoke celebrates it in a fun and unique way that is a hit with audiences of all ages,” said Eddy Cue, Apple’s senior VP of Internet software and services, in a statement. “It’s a perfect fit for Apple Music — bringing subscribers exclusive access to their favorite artists and celebrities who come along for the ride.”

Apple Music launched earlier this year — just as competitor Spotify announced its intentions to move into the digital video world.  The subscription service combine music downloads from iTunes, music and video streaming, and radio streaming in a single application.