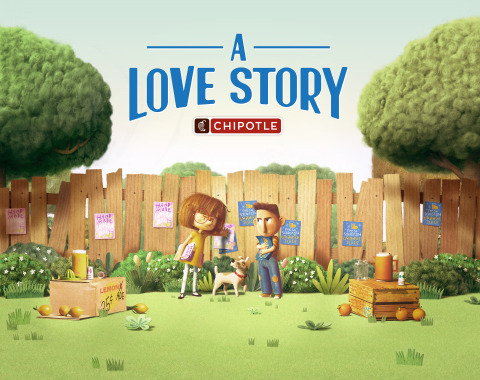 The feel-good digital short comes as the fast-food chain fights to repair its image in the wake of the 2015 outbreak of foodborne illnesses in the U.S.

In the wake of a food-contamination crisis that resulted in dozens of people becoming ill last winter across the U.S., Chipotle Mexican Grill is looking to give consumers something to smile about.

The Denver-based fast-food chain has just released A Love Story — an animated short film that follows the story of two young entrepreneurs, Ivan and Evie, and the escalating rivalry that leads them to build competing food empires.

The film was produced by Chipotle in partnership with indie prodco Passion Pictures, which won an Academy Award in 2000 for its animated film One Day in September. It’s available for free on Chipotle’s website.

Much like the company’s first original short film, 2011’s Back to the Start, and the 2013 follow up The Scarecrow, the digital short is set to the remake of a popular song. In the latest film, it’s a cover of the Backstreet Boys’ “I want it that way”, sung by Alabama Shakes’ Brittany Howard and My Morning Jacket frontman Jim James. The song is set to be distributed on online music platforms like Spotify, Pandora and SoundCloud.

Besides its music-infused shorts, Chipotle has also previously launched an original mini-series, the scripted satire Farmed and Dangerous, exploring how perceptions are created in the industrial food sector.

Mark Shambura, Chipotle’s director of marketing, said the story behind A Love Story is reflective of Chipotle’s own brand history, and intended to remind viewers of the company’s intention to present itself as a values-based business.

“By telling elements of Chipotle’s story through films that are primarily meant to entertain viewers, we have been able to prompt a number of important conversations around food and issues in food,” he said in a statement.

The film’s release comes as the company fights to repair public relations since the E. coli outbreak at several of its restaurants began in late 2015. Earlier this year, the U.S. Center for Disease Control declared the outbreaks to be over, with the last known outbreak recorded Dec. 1, 2015. But the company, which has now implemented an enhanced food safety plan, is still struggling to regain its financial footing.