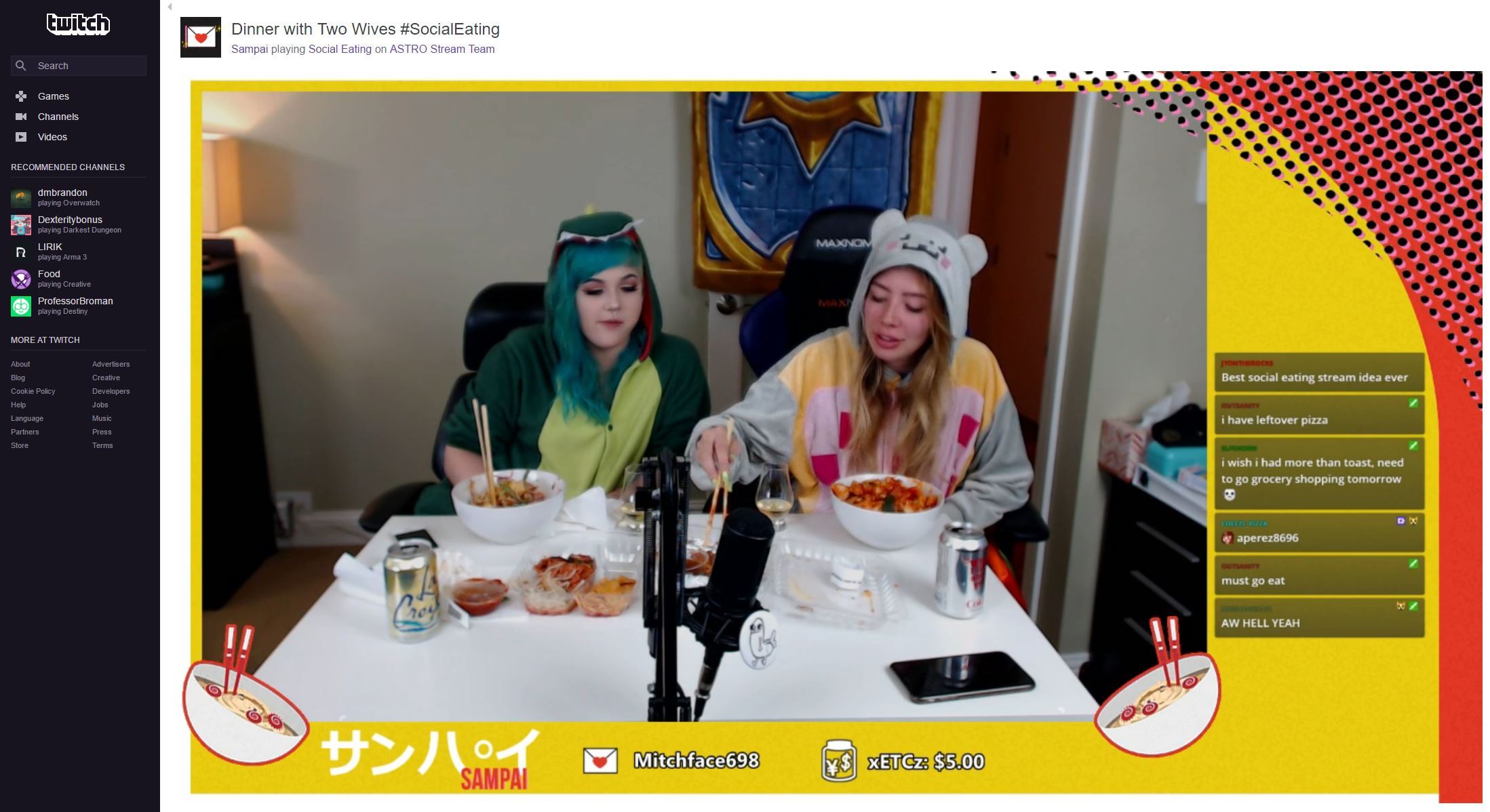 The new food vertical is intended to provide broadcasters with a space to live-stream the preparation of a meal in front of viewers, and eat it, too.

With more than 100 million monthly viewers and a network of 1.7 million broadcasters, Twitch has long made a name for itself among gamers as a space to share their mutual passion for the likes of Minecraft, League of Legends and Dota 2 through clips, commentary and live-streamed video.

More recently, though, the company has shown an increased appetite to expand beyond the gaming space and sink its teeth deeper into the food vertical.

Just months after launching Twitch Food, a dedicated channel featuring a variety of cooking shows and top culinary creators, the platform is serving up Social Eating, a new category for foodie interaction where broadcasters can not only prepare a meal in front of a streaming audience, but eat it, too.

And, just as Twitch does for gamers, the new category is intended to provide broadcasters with an avenue to socialize with their viewers over their favorite meals, whether its something they cooked on the arts-driven vertical Twitch Creative or when taking a break from gaming.

In Korea, the name of the new category translates to CookRoom — and it’s not by accident the company is aware of this. Raiford Cockfield, director for Twitch in Asia, said in a statement that the impetus for Social Eating was driven largely by Twitch’s South Korean gamers/users, who, according to the company, have made food consumption videos a prevalent part of their culture and something many of Twitch’s Korean broadcasters have requested or attempted to integrate into their broadcasts.

(Eating-oriented broadcasts have been growing in popularity in South Korea since 2010, with Korean eating videos attracting thousands of viewers and turning the hosts into celebrities. According to Quartz, the top creators in the space can earn as much as $10,000 a month, not including sponsorships.)

At the same time, Twitch Creative has seen a big push from broadcasters at large who are already live-streaming themselves cooking meals, but lamented to the company that they couldn’t spend an equal amount of time eating what they had prepared.

To that end, Social Eating was launched as a single category among all the current game listings to enable the community to embrace this growing pastime.

Cockfield acknowledged the demand for the new category is a bit unusual but, “the Twitch community is nothing, if not unique, and we support their passion and interests.”

“Twitch is a firm believer in letting the community’s interests dictate the direction of our platform’s content,” he said.