The document maps the current video landscape, and tells us where automation is readily available, where it's finding traction, where it's not and why.

There’s nothing like the digital world to introduce a landslide of new terms and phrases (many of them spawning awkward-sounding acronyms) that, even five years ago, had no place in the English language.

On the publishing side, we’ve managed to wrap our heads around the most-commonly used of these modern idioms — OTT, SVOD, MCN (or, in 2016, MPN),  and even MVPD and TVE.

The same is largely true on the marketing side, with one notable exception: The word “programmatic”, though increasingly a powerful force in the digital video space, still casts a cloud of confusion over many.

Aiming to shed some much-needed light on what’s proven to be a stubbornly perplexing topic, the IAB Digital Video Board has released a white paper delving into the programmatic realm, which is estimated to make up more than half of all U.S.-based digital video revenue in 2016, according to eMarketer. Contributing to the paper were industry experts representing programmatic video on desktop, OTT and linear TV (including AdRoll, AT&T AdWorks, Comcast, Oracle, Sony Pictures Television, Vevo and Yahoo).

Anna Bager, SVP and GM of mobile and video at IAB, said in a blog post the goals of the paper, released June 30, “are to foster an understanding of programmatic video, to help the buy side and sell side have more meaningful conversations, and, as a result, better enable the market to collectively leverage the emerging technologies, scale, and efficiencies that programmatic video can bring to bear.”

It’s worth noting that the IAB has an official definition of programmatic: “The automated buying and selling of inventory.”

But, said Bager (pictured), the reality is much more nuanced as programmatic video is actually made up of degrees of automation that are dependent on the platform.

The paper maps the current programmatic video landscape, and offers a variety of use cases and scenarios, illustrated by platform, where automation is readily available, where it’s beginning to find traction, where it’s not, and why: 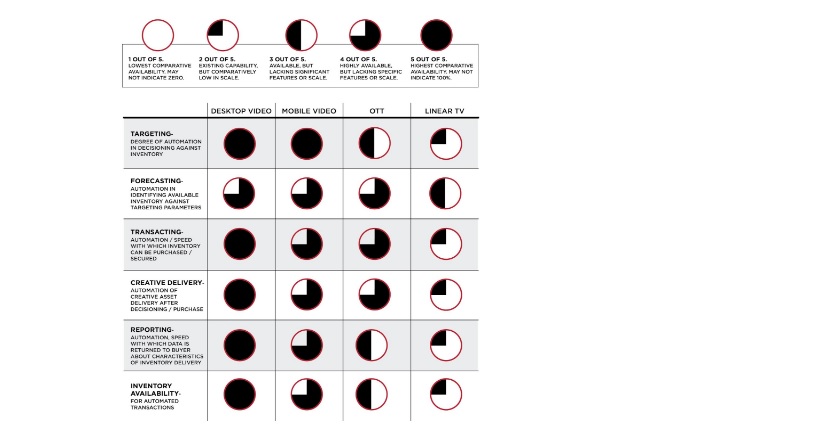 The good news, for those still hazy on the programmatic concept, is that the report’s authors believe the day will come “in the none-too-distant future” when the term will become redundant — “in the same way that the word digital has become when referring to digital video.”

Until then, the white paper concludes that programmatic video is not yet a one-size-fits-all solution for buyers, sellers or publishers, but “often requires a deeper conversation and greater understanding.”