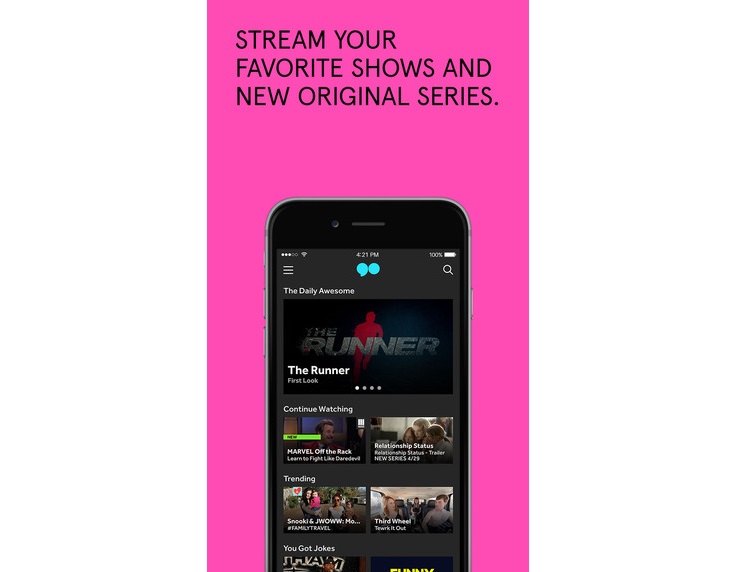 Version 2.0 of the mobile platform will beef up content discoverability and reduce the number of clicks it takes to start streaming.

Nine months after its entrance onto the digital scene, mobile-first streamer go90 is getting a new look.

But, perhaps more signficantly, Verizon is promising that go90, version 2.0, will go beyond a site redesign to include navigation enhancements to help users discover, watch and share its slate of original and licensed programming, and reduce the amount of clicks it takes to start streaming that content.

Initial changes were introduced on June 20 with updates expected to begin to roll out widely over the next few days.

Among the changes, the platform has updated the navigation menu design and added pages to make specific series easier to find. The update will also allow users to cast go90 to larger screens via Apple TV and Chromecast, and explore curated networks like action, comedy, drama, and reality.

In version 2.0 (which is available for download now), registration will not be required to watch go90 videos. Users can also now comment on videos while viewing programming (however, they will have to register to comment on or “favorite” content.) The platform is also introducing a simpler way to share clips or full episodes from shows and live events via email, text, Facebook or Twitter.

The update comes as go90 — or, rather, platform parent co Verizon — looks to deepen its hold on the U.S. streaming market. In May, the telco made public its plans to shift go90’s image from a mobile-only platform to one that is mobile first. Included in that move is the planned expansion of go90’s programming slate to AOL platforms in Q3 2016.

Verizon exec Brian Angiolet told StreamDaily in an interview in May that broadening the reach of the ad-supported go90 service has been in the works since it launched in October in the U.S. — shortly after Verizon acquired AOL and its digital assets, including The Huffington Post, for $4.4 billion.

“The idea always was that…we would publish (the go90 content) out and maximize the return on investment across all our distribution platforms,” Angiolet said.

Go90’s fast-expanding slate of original content has made the service one of the biggest stories of the digital industry over the past year as Verizon opened its wallet to buy up exclusive scripted short-form (between five and seven minutes per episode) programming from a variety of partners, including StyleHaul, Machinima, New Form Digital, Vice Media and Disney’s Maker Studios.

At the same time, it’s been no secret that go90 has struggled to find its place in the market. Verizon has, to date, refused to release the download numbers for the service or the view count for its series, leading industry watchers to speculate over its financial viability. With the expense of securing exclusive content, the service is reportedly at least two years away from profitability.