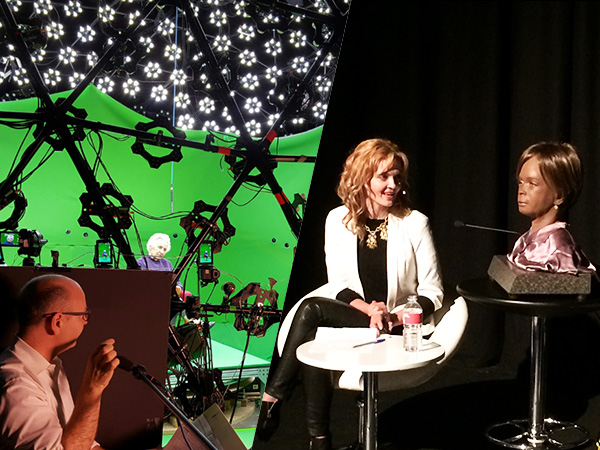 Sheffield ’16: Inside the Alternate Realities Summit

The festival's newly renamed summit featured the world premiere of the UN's latest VR film, and a keynote from a sassy android.

As luminaries from the interactive world convened at Sheffield’s Crucible Studio on June 12 for the newly titled Alternate Realities Summit (formerly Crossover Market), one of the day’s most vocal participants proved to be a salty android named Bina48.

The android keynote was a first for the buzzworthy program, curated by Mark Atkin, and kicked off a day of sessions divided into artificial intelligence (AI) in the morning with “Robots, Androids and Avatars Live,” followed by the return of the virtual reality-centered “VRfternoon.”

Interviewed by Canadian media producer Ramona Pringle, Bina48 (pictured above) is billed as one of the world’s most social robots, whose knowledge and memories are based on a real person’s – in this case, those of Bina Aspen, wife of the android’s creator, Martine Rothblatt. Bina, who currently exists only as a self-described “computerized talking head,” was asked for its opinions on such topics as love and war and offered rambling and off-topic, though entertaining, answers. The Sheffield Robotics team, led by Tony Prescott, also presented three robots to the audience, in a session that showcased the growing social and economic influence of AI. A highlight of the morning’s sessions was a presentation by Dr. Stephen Smith of the USC Shoah Foundation, demonstrating the group’s “New Dimensions in Testimony” experience. As previously reported by StreamDaily’s sister publication Realscreen, the project uses a mix of multi-dimensional video and audio responsive software that allows users to converse with a projected image of a Holocaust survivor and receive answers in real time.

A dozen survivors have been interviewed for the project so far, said Smith, and the Sheffield experience features Pinchas Gutter. Beginning in March 2014, 50 cameras were arranged around Gutter to create a 3D image, and he was interviewed for seven days and asked a total of 1,000 questions. In total, 1,500 responses were captured. Smith says the team at USC is currently at work on a projector array so users can – without using 3D glasses – see a 3D, full-size version of Gutter in the room.

“We made those decisions because we knew that if we didn’t collect the data now for this, we won’t be able to collect it later because our subjects are between 83 and 92 years old. There’s no, ‘Can you come back in 10 years’ time when the technology’s matured.'”

Smith asked the survivor – who was projected on a screen – a number of questions, receiving almost immediate replies. The real surprise, however, came later when Gutter stepped out of the audience to join Smith on stage.

“Can you imagine, we don’t have any more veterans for the First World War and if those veterans had this kind of technology available at the time, and would have been able to – first-hand, as witnesses – project to the world the horror that they experienced in the trenches, what kind of effect would that have had on humanity?” said Gutter.

“What I’ve been doing is proving my title wrong because the filmmaking part isn’t the point of VR.” – Google’s principal filmmaker for VR, Jessica Brillhart

Following the break, Jessica Brillhart, principal filmmaker for VR at Google, took the stage at the Crucible for the first time. The creator, who last fall urged IDFA delegates to keep an open mind about VR, reflected on some lessons learned in the past year. Since May 2015, Brillhart has captured 750 shots and 3,176,020 frames, but says she is actually trying to defy her title as VR doesn’t use the traditional components of filmmaking.

“What I’ve been doing is proving my title wrong because the filmmaking part isn’t the point of VR,” she says. “We go into an experience and we want to express it to someone else. We think, ‘Okay, I had this experience,’ and show photo and video and craft this nugget of a thing and that person engages with that. That’s the medium and that nugget is story. In VR, most of that goes away. Medium and story don’t have strongholds as they did before.”

Brillhart placed an emphasis on “probabilistic experiential editing,” which anticipates the ways in which a user will interact with the world, as well as building relationships with the audience by thinking of elements such as height and elevation in relation to subjects, and using eye contact to bring someone into a space. Allowing users to discover, she says, is also key. “It’s the difference between someone handing you a penny and finding a penny. Experiences can be thought of as things people can own as well, and value. I don’t present [things to users] a lot, but I do put things in people’s peripherals,” she said.

Brillhart concluded with three elements that will dictate the future of VR:

Later on, the “360 Sound for a 360 Experience” panel saw the Alternate Realities audience fitted with wireless binaural headphones provided by Trevor Cox, a professor of acoustic engineering at the University of Salford, and Tom Parnell, research studio manager for BBC R&D.

Using a model with affixed microphones (pictured), the team demonstrated how spatial audio is being applied to make VR experiences more immersive. The audio heard by audiences came from wherever Cox was speaking in relation to the model, demonstrating the application of 360-degree sound. Parnell also demoed a couple of commissions from the BBC, which is increasingly working with binaural sound for more immersive audio experiences.

The United Nations’ Gabo Arora was also on hand for the world premiere of the organization’s latest VR film, Beyond the Lake, which centers on a Burundi refugee in the Democratic Republic of Congo who is determined to protect her daughters from sexual violence and other issues affecting her community. The doc is the fourth in a series of UN films trying to bring awareness to global crises and issues. Last year, Arora and Chris Milk’s Clouds over Sidra won the festival’s interactive award. The UN also unveiled its official “UNVR” app – developed in order to get the films, which also live on the Vrse app, on as many platforms as possible.

“We’re going to have not only our films [on the app], but it will also serve as a distribution platform for other filmmakers and people who do films tied to UN themes,” said Arora, adding that the success of Clouds encouraged the UN to continue investing in films, and he now receives many proposals for future projects.

Arora also noted that the UN is partnering with Samsung to access some of their smaller cameras and get the technology out into the field.

Other sessions featured in the Summit tackled VR applications in journalism and theater, as well as a discussion around findings from the British Council’s Empathy Station installation, which navigates the understanding of VR as an “empathy machine” around certain issues and experiences.