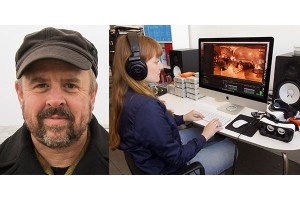 Hustwit, Porter and Curry on going the Scenic VR route

Officially launched in April, the studio is setting out to fund and produce VR doc shorts and series, with plans to release 40 films in the first year.

Gary Hustwit, director of such docs as Helvetica and the forthcoming Workplace, had been observing the early non-fiction efforts in VR for about a year when he noticed that doc makers weren’t always being invited to use the technology – an oversight he felt was having an impact on the types of stories told in VR.

With the field dominated by technologists and commercial directors, VR can be difficult to break into for doc makers, largely because the means of production – a GoPro Odyssey rig, for example – are still costly and hard to come by.

“There’s been so much attention and resources put into the hardware and technology of virtual reality, and I don’t think as much energy is put into stories.”
-Gary Hustwit

Hustwit (pictured, top) saw more potential for the medium, and it involved bringing doc makers into the VR fold. The resulting work, he proposed, would introduce better storytelling, and this past spring, the director’s new VR content studio, Scenic, was formed.

“Part of the reason I started Scenic was to try to get the tech in the hands of some amazing doc makers and see how we can impact the conversation,” he told Realscreen, StreamDaily’s sister publication. “There’s been so much attention and resources put into the hardware and technology of virtual reality, and I don’t think as much energy put into stories.”

Officially launched in April, the studio is setting out to fund and produce VR doc shorts and series, with plans to release 40 films in the first year. The seed capital was privately funded, and Hustwit and his partners are planning additional rounds of fundraising as Scenic evolves.

The collective currently includes a stable of acclaimed doc makers – Jessica Edwards, Marshall Curry, Dawn Porter and Amir Bar-Lev, among others – and Hustwit is bringing in an additional five filmmakers, as well as taking pitches for one-time collaborations and one-off projects.

“Great doc makers obsess about story all the time and I think there are ways that VR can use things that traditionally shot docs can’t,” said Hustwit. “A lot of this is about trying to just come up with that language for non-fiction stories in VR, and play around with the possibilities.”

Overall, the group hosts a range of experience levels: while some filmmakers have been experimenting in VR and have ideas on how to apply the technology, others were interested but hadn’t had access to the necessary hardware, or were a little intimidated by VR. Dawn Porter, for example, had been eager to try her hand in the field, but says the technological training was daunting. The Gideon’s Army director points out that most traditional doc makers are still concerned by the intricacies of equipment needed, as well as the shoot and edit and sound sync processes.

“Gary’s initiative means that each of us will have an experienced team and training on the equipment so we can focus on what we love – the storytelling,” she said in an email.

“That’s part of our mission —  to sort of demystify VR and get the tech into the hands of these filmmakers and let them experiment with it, let them try it, fail, try again. I think the only way we’re going to have truly transcendent work is to let people like the filmmakers on our team experiment with the tech,” said Hustwit.

He also acknowledges the diversity among Scenic filmmakers, of which more than 50% are women. It’s in stark contrast to the male-dominated VR content space.

“That’s something that we decided just cannot happen, not anymore. There’s got to be more diversity on the creator’s side,” he said.

Scenic has three projects – or, as Hustwit prefers to call them, pilot programs – in production right now, and a release plan is to be determined later. Because of how quickly things move in the VR space, he’s reluctant to discuss any topics and stories until projects are closer to release, but hints that people should consider the types of filmmakers working with Scenic.

“Look at the subject matter of what the filmmakers have made, and you’ll probably get a pretty good idea of the general subject matter we’re going to be investigating in VR,” said Hustwit.

Porter’s doc Trapped follows abortion providers in the southern U.S. and Marshall Curry’s recent feature effort, Point and Shoot, centers on an American who joined the Libyan uprising while on a motorcycle trip through Northern Africa and the Middle East.

Meanwhile, Jessica Edwards‘ Mavis! is a portrait of gospel and soul music legend and civil rights activist Mavis Staples. Edwards, who three months ago didn’t know how to operate a rig, describes Scenic as a filmmaker-driven undertaking that will drive home what’s been missing in the space: good stories.

“The tech aspects of [VR] have been very much driving the content, and that’s fine because that’s what needed to happen,” she said. “But now really great storytellers will be able to take that next step and make this a mass-consumed thing.

“We’ve been watching so much,” she added, noting that the directors in the Scenic roster also talk to each other and filmmakers outside that circle about the medium. “We talk about what’s worked and what’s not, and we’re just playing with it as much as we can.” Marshall Curry said he joined Scenic because he’s always been interested in different kinds of storytelling. Before making his first feature doc, Street Fight, he worked for years at a New York-based interactive design firm that made touch-screen interactive docs for museums and later became a web design shop.

“It was exciting work in those years, trying to figure out the grammar of how to tell stories or convey information in a brand new medium,” he said in an email. “And in many ways, VR these days feels very similar.”

The director said it’s been fun to discuss and swap ideas on VR with the collective, many of whom he calls friends. Traditional doc-making informs VR to some extent, but the two media are also very different.

“There’s a level of control that you have in making a traditional doc – picking a particular shot to convey an idea or emotion. But you have to give that up with VR. You curate a situation or environment, but you have to give up much of that control over details, which is both frustrating and liberating,” he added.

In terms of content, Scenic hopes to feature thematic series, with different directors contributing a short that fits into an overarching theme, as well as a longer-form doc feature broken into smaller pieces and released serially. A standalone doc could also be an option, including a feature-length project – but only when the playback and capture technology gets better.

“I don’t want to strap an Oculus to my head for 90 minutes,” said Hustwit. “But I could watch 10 six-minute pieces if they’re broken up like that.”

Scenic will be viewable via Google Cardboard, Samsung Gear VR and Oculus Rift. There will also be a mix of embeddable video available on the Scenic website and VR app through assorted distribution companies. Hustwit said he wants everyone to be able to experience the material through a headset – “It’s just so much more immersive” – but also recognizes that headset users are still a small percentage of the overall viewing audience.

“A lot of people haven’t even watched the New York Times stuff on a Cardboard, and are even scared of it. I just hope that more documentary filmmakers can try VR non-fiction and at least understand what some of this hype is about and hopefully get involved in creating some.

“I wish there were 10 Scenics that were opening up this year,” he said. “It’s not even about there being competition: we need more people involved in creating great VR.”