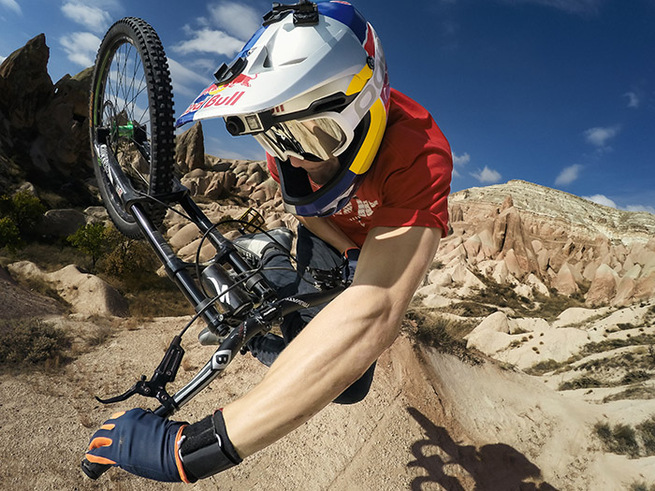 Adventure camera maker GoPro has partnered with Red Bull in a deal designed to not only fuel a new slate of extreme sports content, but also pump some energy into the GoPro brand.

Under the deal, GoPro will become the exclusive provider of footage for all of Red Bull’s upcoming branded events. In return, GoPro will have access to more than 1,800 of the sports drink company’s action-themed international competitions and festivals.

The companies will share content rights on all co-pros, which will result in Red Bull and GoPro brand content distributed across all of their own distribution networks (which include The GoPro Channel, Red Bull’s linear channel Red Bull TV, its SVOD Red Bull TV Online and more).

For GoPro, the global scale of Red Bull is a big advantage. Red Bull, which got its start in the mid-80’s selling energy drinks, began embarking on original content creation in the early 2000’s in order to deliver footage of its sponsored events (which delve into the worlds of snowboarding, motocross, skateboarding and even Felix Baumgartner’s free fall from 128,000 feet).

It launched its Red Bull Media House in 2007, which enabled to company to offer production and distribution services for long and short-form videos. It’s created documentaries both within the extreme sports vertical (such as the recent adventure doc PaddleSUP: Amazon) and within other genres (like the Juliette Lewis-centered rock doc Hard Lovin’ Woman).

While Red Bull and GoPro have partnered in the past, according to GoPro founder and CEO Nicholas Woodman, the partnership is being described as the first “official partnership.”

“We’ll be able to more effectively help one another execute our shared vision and scale our respective business,” Woodman said in a joint statement by the two companies.

GoPro has also partnered with Twitter to enable direct live-streaming to the Twitter-owned Periscope app (so athletes and adventurers can live-stream footage from the slightly more durable GoPros, rather than risk grabbing the shot with their mobile devices) and last year paired with Google to create the Google Jump 360-degree camera rig which would enable users to capture simultaneous footage from up to 16 GoPros.

GoPro made a big effort to push to mobile content, even as it sorts through disappointing financial results. In Q4 2015, the company (which brought in $435 million in revenue) said sales of its adventure-oriented equipment were “lower than anticipated,” resulting in a pending cut to 7% of its workforce (roughly 105 people). The most recent quarter has not been much kinder to GoPro — the company reported $183 million in revenue, down 49.5% year-over-year (although Woodman said in a statement accompanying the financial results that demand for the cameras remains “solid”).