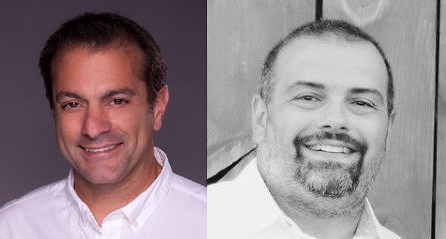 The appointment of SVP of production Dave Shikiar and editor-in-chief Jason Dimberg reflects the company's growing focus on original production.

Like so many other multi-channel networks, in the past two years Machinima has increasingly shifted its focus from building its online creator network to distribution and original content creation, pouring more of its resources into programming and production.

To help with that effort, the company has now appointed two new senior execs.

Jason Dimberg (pictured right) joins the company in the newly created role of SVP of programming and editor-in-chief of Machinima, while former production head Dave Shikiar (pictured left) has been promoted to SVP of production. Both will report to CEO Chad Gutstein.

Dimberg has worked in the digital video industry since 2002, and spent much of that time in leadership positions with Yahoo (including as senior director of its now-defunct VOD service, Yahoo Screen). Prior to joining Machinima, he worked as a manager with Amoveo Consulting where he worked with various media and tech companies around the creation and growth of their online business, including programming, distribution and monetization strategies. Dimberg will be tasked with leading Machinima’s content development and programming across all of its platforms and distribution channels.

In his more senior position, Shikiar will now oversee the day-to-day operations and expansion of Machinima Studios, which launched in September 2015. He will also oversee the development and distribution of current projects, particularly Machinima’s new daily series Inside eSports.

Prior to Machinima, Shikiar worked as the SVP of production and development at Zodiak L.A. and managed several linear reality series including Celebrity Wife Swap, Killer Karaoke and Secret Millionaire.