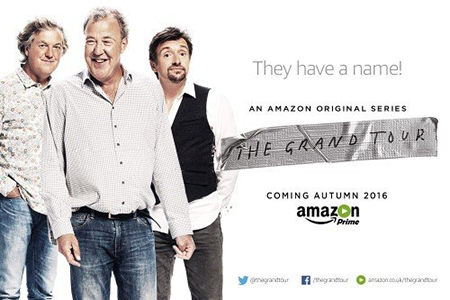 The Grand Tour will see the former Top Gear star, along with James May and Richard Hammond, host weekly episodes from global locations.

The Grand Tour (pictured), which began filming in February, will feature the trio of presenters as they host each episode from different locations across the globe each week, with pre-recorded segments filmed in front of a live studio audience housed within a giant tent.

“After nine months of deep thought, debate and deliberation, the guys have come up with a name that reflects the global ambition of the new show,” said Jay Marine, VP of Amazon Video Europe in a statement.

So, the Grand Tour (GT for short) will come from a tent, which we will put up in a different location every week. Your town?

…Best of all, we’ve got a MASSIVE tent as our studio. Same tent, different view, different crowd every week on our Grand Tour. — Richard Hammond (@RichardHammond) May 11, 2016

The series, which is produced by long-time executive producer Andy Wilman, is scheduled to launch this fall for Amazon Prime members.

Amazon announced last year that Clarkson, Hammond and May would reunite on an original series available for Amazon Prime members. The trio signed on for three seasons of the program after parting ways with BBC2 last March.

The Grand Tour will now rival the BBC’s revamped Top Gear series in the digital space after it was announced in April that the Chris Evans-fronted series exploring all-things cars would be included in Netflix’s lineup under an existing international distribution deal currently in place with the BBC.

The traveling format of GT is intended to provide viewers around the world with the opportunity to become part of the audience when tickets are released through a sweepstakes this summer. Details of the location schedule and ticketing information will be announced in the near future.