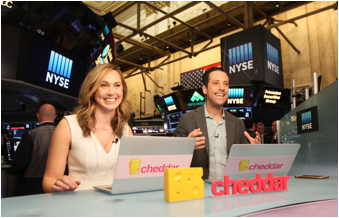 The four-month-old news site will expand its offering with a paid tier, promising to fill it with original and exclusive content.

Vimeo has officially cut (a deal with) the cheese.

The streaming platform has signed a multi-year distribution partnership with Cheddar News Network to its SVOD platform.

The digital news channel broadcasts from the floor of the New York Stock Exchange, covering the tech, media and entertainment space. It launched this past February by former Buzzfeed president Jon Steinberg. It targets business-focused millennials, and streams its content live for two hours a day on platforms such as Facebook. The content is then re-cut, re-packaged and distributed across other platforms.

Until now, Steinberg has told other media outlets that the primary income source for Cheddar will be through its distribution deals. The Vimeo partnership adds a subscription layer to the mix: viewers can subscriber to Cheddar for $6.99 a month through Cheddar’s owned sites, Cheddar.TV and Cheddar.com, according to a release.

“Everyone knows (Vimeo) has… a massive millennial audience, and a leadership position in subscription video on demand, with 1.2 million users who have bought content on the platform. TV channels and cable systems are over, this model is what’s next,” said Steinberg, in a release. Vimeo has previously launched SVOD services for groups such as the National Film Board of Canada, and recently acquired the tech start-up VHX in order to provide creators with more options for setting up their own distribution channels.

The news co will also launch a dedicated iOS app and TV apps within the next 90 days, power through Vimeo’s tech platforms.

To fill its paid-service, Cheddar will expands its offering, with exclusive interviews, long-form product deep dives and in-field pieces.