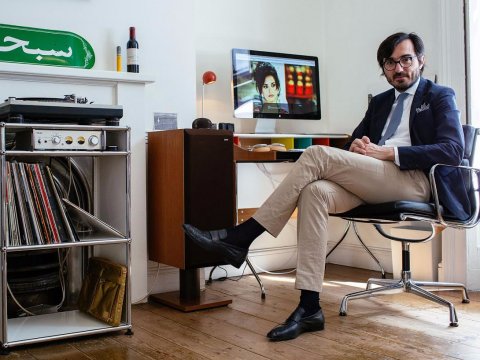 Efe Cakarel on why loyalty is worth more than subscriber count

From the Big Chair: The Mubi CEO talks to StreamDaily about his obsession with Netflix and how his company beat the SVOD giant to China.

Efe Cakarel doesn’t pretend he’s sitting at the helm of a giant like Netflix. The global subscriber numbers for his U.K.-based subscription service, Mubi, are in the six-figure range, compared to Netflix’s 81.5 million.

And, unlike the millions of dollars Netflix pours into exclusive content, Mubi (which charges customers $5.99 per month) has yet to fund an original, focusing instead on select international art house titles.

But what Mubi does have plenty of is demand.

“Gone are the days of running out to your local Blockbuster when you want to rent a movie — people want something instant, and we are really riding that wave of the need for instant entertainment,” said Cakarel, who estimates his company is growing in subscriber base by about two per cent per week.

Mubi was founded in 2007 as an SVOD service similar to Netflix, boasting a small indie library.

Since 2012, when the company tweaked its distribution model (it now makes only one movie available to stream per day, and users have access to that movie for one month), Mubi has become the SVOD darling of the indie world. It’s signed content deals with the likes of Sony, Paramount and Miramax, and gained exclusive SVOD rights to the newest release by Paul Thomas Anderson Junun, as well as the award-winning film Arabian Nights.

That strategy has paid off. While Mubi’s subscriber base is still small (100,000 as of January 2016), it was recently valued at $125 million, Cakarel told StreamDaily.

The small streamer has also beaten Netflix to one of the most-sought-after streaming markets in the world, China, following a distribution deal struck with local prodco Huanxi Media.

We caught up with Cakarel recently to talk more about that China deal, and where he see his company moving in the months ahead.

No surprise, Netflix came up during the interview — a lot. Yes, he binge-watches House of Cards just like everyone else in the world. But Cakarel isn’t apologizing for the obsession. The following is an edited transcript of our conversation:

What’s up with Netflix? Why focus on the competition?

You can’t ignore Netflix. They’re the dominant player in digital distribution. If you’re a young, ambitious start-up growing up in the shadow of Netflix, you want to be thinking, “How can I provide the better-than-Netflix experience? Or, at least, (grab) a segment of audience that Netflix is not satisfying?”

For us, that turned out to be people who really love films. We all turned in to watch House of Cards — at least, I did. They’re investing in original television productions, but frankly their film selection is terrible. You spend half an hour trying to find a film you want to watch. So how do we differentiate ourselves? Not with the breadth of content, but with a limited selection of amazing films that we curate. Our model became that. We said, “What is a number of film that makes sense?” (The answer is) 30. You really don’t need more than 30 films, and if it’s curated well, you can create an amazing selection of films that will satisfy a fairly large audience. Our model just became one film a day.

So how, with a subscriber base that’s still in the six figures, is Mubi managing to thrive so well?

It’s all in the DNA of the company. We are very mission- riven to create a large audience for quality cinema. You have something generally good that people are more focused on. (Netflix’s) House of Cards gets a lot of engagement, awards, media attention, but you don’t want a business where you only have people leaning toward the one big blockbuster. We instead take something small, and we get to a dedicated, core audience of people who really love cinema. General is not the same as generic — if everything is generally good, you delight people. We do plan on expanding on that over time, but it’s already going well without really any big marketing efforts.

You’re moving into China — I have to ask, because that’s been a tough road with Netflix. How did the Mubi deal happen?

Without the local partner, we wouldn’t have been able to do that. Even a company as powerful as Netflix could not get appropriate licenses and afford to aggregate enough content to be relevant to that very specific audience. If Netflix couldn’t do that by themselves, there was no way that we could. The only way that you could do that was to have a very strong partner that has access to relevant content, and I really mean Chinese content. (Huanxi Media) was able to help us navigate the whole regulatory environment. It was founded by Dong Ping, one of the biggest producers in China. I actually gave him most of the upside. Huanxi actually owns 70% of the joint venture in China, and we own only 30%, but 30% of something that is potentially really big is more than 100% of not having anything in China.

In this fast-moving SVOD industry, what keeps you awake at night?

Probably staying relevant, and what you increasingly have to do to stay relevant.

Do you mean staying relevant in consumers’ minds? Or keeping up with relevant content?

Both. In order to stay relevant, you want to be able to show newer content, new releases. But the current distribution set up doesn’t always allow companies to be able to do that. They’ve already thought about this old-fashioned model of windowing. You wait for three-plus years just to show a good, new film like The Martian, The Revenant. Even Netflix, even if they put $100 million on the table, they (some of these titles) won’t be able to show for up to two years because of the existing distribution set up. Netflix is able to break that by releasing its own content. We need to do that as well, but we don’t have that yet. How can we be smart about deploying millions of dollars into producing really good content? How can we be active in acquisitions at the festival circuit and the independent circuit? Our first foray into this was with Arabian Nights, which we (just released) April in the U.K.

I start the day with business calls with China and I end the day with calls with our team in San Francisco working on the product. No two days are the same, which is the best part of my life. It’s an amazing team, the 50-some people at Mubi. My job is to really, really okay things and let my team have the motivation to do the best job that they can. I think the CEO should only do three things:

That’s my role, but these days, the China transaction and our upcoming launch in other territories is occupying a great amount of my time. I don’t remember the last time I left here before nine o’clock, but I wouldn’t have it any other way.