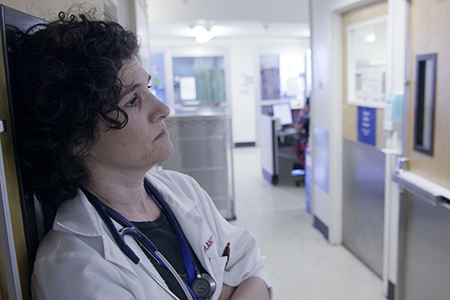 Following its premiere at the Tribeca Film Festival on April 17, Extremis (pictured), a doc short from Academy and Emmy-nominated filmmaker Dan Krauss, is headed to Netflix.

The doc — billed as the SVOD giant’s first original doc short — explores the difficult decisions that doctors, families and patients face in urgent end-of-life cases. It will debut globally on the SVOD in September.

Extremis was shot at the intensive care unit at Highland Hospital, a public care facility in Oakland, California, and tells the stories of ordinary people from a range of backgrounds and beliefs, all grappling with profound questions around human mortality.

“I strive to explore weighty ethical and moral questions though my films,” said Krauss in a statement. “Doctors today can sustain life in ways once thought impossible, ushering in new and extremely complex questions about what it means for critically ill people to be kept alive. I hope audiences will take courage from the incredible dignity and compassion that the film’s subjects displayed amidst the most challenging circumstances.”

Extremis is also slated to screen at the San Francisco International Film Festival on April 23.

Krauss’ doc short The Death of Kevin Carter was nominated for several awards in 2006, including an Oscar and two Emmys. His 2014 feature doc The Kill Team won the Best Feature Documentary prize at Tribeca, as well as an Independent Spirit Award.