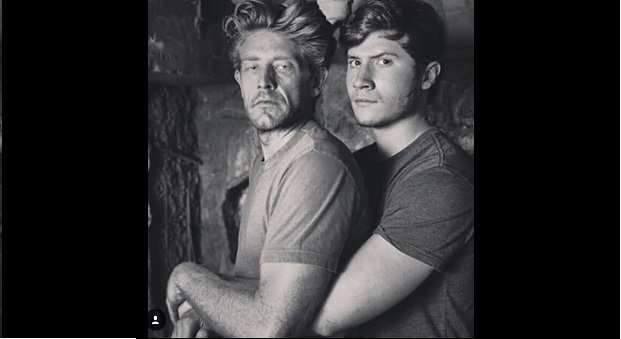 Viners bring the laughs (and the fans) to Digital Riot comedy

Jason Nash and Brandon Calvillo team up in a road trip comedy penned by Nash and due for release via microsites and mobile this fall.

Jason Nash has been in the business of comedy, one way or another, for longer than most of the stars on Vine have been alive.

It’s a reality that hasn’t escaped the 41-year-old writer, stand-up performer and actor who is prepping to direct his second direct-to-consumer project, FML, a feature film starring Nash himself and fellow Viner and frequent comedy collaborator Brandon Calvillo. (The two are pictured above Nash, left, Calvillo, right).

In a recent YouTube video on his channel hilariously entitled “Being the Old Guy on Vine” , Nash complained about the ageism he endures.

In real life, Nash said the absurdity of his (ahem) “mature” presence on the platform amid a sea of kids hits closer to home.

“My wife thinks I’m crazy,” he said in an interview with StreamDaily from California.

Truth is, Nash has been cashing in on that generation gap since he uploaded his first Vines in 2013. Since then, the offbeat (and sometimes off-color) comedian has built a dedicated audience of 2.4 million subscribers (making him the 848th most popular Viner on the platform). In total, he estimates his fanbase at three million when he includes Facebook, YouTube, Snapchat and Instagram.

After 15 years on the stand-up circuit, and writing and selling scripts to traditional producers, the comedian said the rise of digital has been a revelation to someone like him.

Discovering Vine “was like crack,” he said. “You just couldn’t believe it. There were no rules. You could do whatever you wanted and you were with all these kids who were doing crazy stuff. You could make something and have it up to the world to three million people in literally a minute.”

That’s a marked change from his experience on the traditional side of the business where “unless you are Seth Rogen, for the rest of us, it is really hard to get a comedy made.”

Nash’s current film is being produced by Digital Riot Media, a newly launched digital prodco led by John Baldecchi. Nash wrote, directs and stars in the film along with 21-year-old Calvillo (who has six million followers on Vine). Also producing is Kevin Herrara’s Moopsy, according to a report in Variety.

The story is billed as a road trip comedy  and follows the two social media stars as they travel cross-country looking to boost their internet followings. One of the characters (Nash) is married and “doing it for his family,” said Nash, while the other (Calvillo) “is a virgin trying to meet a girl.”

Nash said the cast was selected as much for their comic abilities as their fanbase, both online and in the linear realm.

“I packed the movie with a lot of great people who have big followings and also with people who are traditional stars, who kind of blend a little bit of both worlds,” he said.

Baldecchi said the casting strategy was an important element, but, ultimately, it was the script that really sold him on the project.

“Jason wrote a piece that has terrific characters and feels highly relevant. We love the idea of making a satire about fame, set in the landscape of social media. The story is current, relate-able and made us laugh,” he said in an email.

Digital Riot’s distribution model is about sending movies directly to the fans of the talent cast in the movies, by way of microsite and mobile, then iTunes, Netflix or Fullscreen, Crackle and other digital platforms, said Baldecchi.

A linear run is also possible following the digital windows.

Nash said the film could also see a theatrical release via a service such as Tugg based on fan demand, but noted the big screen is not an essential ingredient in the film’s success.

“I bet this movie is going to be watched on a phone,” he said.

Nash previously wrote and acted in another direct-to-consumer comedy. Jason Nash is Married also featured Patton Oswald and Andy Daly, among a host of TV and digital stars. Following its release in 2014, the film reached number one on the iTunes comedy charts.

He’s hoping to repeat that success with this latest offering, which is slated to begin production this month with a tentative release date set for this fall.

Making money in digital is still a risk, said Nash of the project. But, he said, “that’s what I want to do. If I could keep making digital movies for the rest of my life, that would be great.”