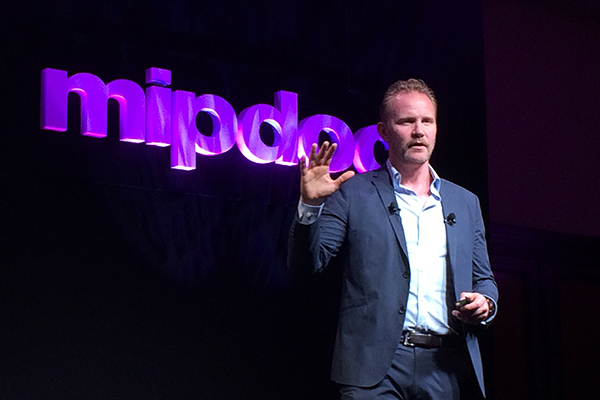 The Warrior Poets founder is now working with Maker Studios to develop seven original web series that will then be sold back to television.

CANNES —With more people watching non-fiction entertainment than ever before — due largely in part to the assortment of platforms at their disposal — Super Size Me director Morgan Spurlock believes every production strategy these days must have a digital strategy.

“We should all be focusing our production efforts on how do we start to transition into a digital marketplace in a way that is accessible, easy and makes the most economical sense to all of us,” said Spurlock, Warrior Poets founder and CEO (pictured), in his April 2 keynote at MIPDoc.

“Your digital strategy should already be a natural extension of your current pipeline,” he said.

Today, Warrior Poets’ business is sectioned into thirds, with 30% dedicated to film, 30% to television and the remaining 40% devoted to digital. (The latter category is expected to rise  above 50% in the coming year).

A digital focus has been part of Spurlock’s DNA for nearly 16 years, he said, noting that MTV’s I Bet You Will in 2002 – the first series Spurlock created – began as a webcast.

Warrior Poets has since gone on to develop such original digital series as Hulu’s A Day in the Life; Yahoo!’s Failure Club and Losing It with John Stamos; and AOL’s Connected, all of which have since travelled to linear television. Following Spurlock’s presentation, he was interviewed by Diego Buñuel, head of documentaries for Canal Plus

The New York-based studio is now working with Disney-owned MCN Maker Studios to develop seven original series for premium web channel Smartish that will then be sold back to television.

As part of the keynote presentation, Spurlock premiered three new female-focused series geared towards 16- to 24-year-olds – a demographic consuming “almost 70% of their content digitally.” The projects include:

Millennial women, the Academy Award-nominated director said, are the “most educated generation of the history of this entire planet” with more than 65% of young females attending post-secondary institutions. Young women also represent US$840 billion in annual purchasing power and use multiple screens simultaneously, he added, but most importantly, they share content constantly.

“This is a huge one because, especially in a world where we’re fighting against marketing, these are your evangelists,” said Spurlock. “These are the people you want sharing, talking and getting everything you made out in the universe.”

While the goal for the majority of prodcos is to monetize off of the digital content they produce, Spurlock stressed that studios must alter their mindsets to instead focus on how to not lose money.

“So long as you are cash-flow positive in creating content for people to see that can make a difference, you are winning,” he said.

Spurlock later turned his attention to branding, which he argued producers should take more advantage of.

It’s a path Warrior Poets and Spurlock have previously taken, having partnered with GE on the Focus Forward film series and with LucasFilm to create original digital content for the latest Star Wars installment. Additionally, the newly announced What We Teach Girls will reveal a branded partnership in the near future.

On top of turning to such profitable opportunities as television and additional one-off opportunities, Spurlock said producers can bring their projects to conglomerates that will flex their marketing muscles to promote the series. Inversely, television series and films can be packaged into digital series for further monetization opportunities.

“Brands are realizing that 30-second commercials don’t work anymore,” said Spurlock said. “It’s all about the story, and so long as you can tell a good story, brands are now willing to go on that ride.”