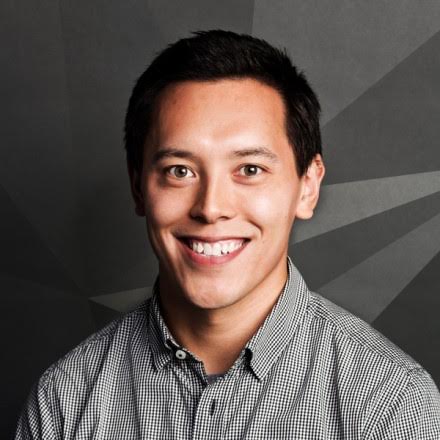 Defy Media digs into the digital diets of young Americans

The latest study from the Gen Z-focused digital media co. finds that YouTube still reigns, but social media is gaining ground as the go-to streaming source.

That members of the coveted millennial demographic, and their increasingly powerful Gen Z siblings, love to share the details of their lives over social media is no surprise to anyone these days.

But, in a year that’s seen a explosion of new streaming services onto the market, there’s a new trend in social-media use emerging — one that promises to have lasting impact on the online video realm, according to a new study from Defy Media.

“People are flocking to social platforms now not just to connect with their friends, but to connect with people they don’t know, people who they consider to be ‘talent’ or ‘celebrities.’ And they are connecting with them not just to get updates, but actually watch video content from them on these new platforms. That’s definitely something that we heard was new,” said Andy Tu (pictured), Defy’s EVP of marketing.

Tu’s comments to StreamDaily follow the release of Defy’s latest research into the video diets of American teens and millennials. This year’s Acumen report, the fourth of its kind in as many years, focused on uncovering exactly where and when the key audience demo are watching video, what they’re willing to pay for, and what ads they are willing to watch.

The company partnered in the research with Hunter Qualitative and Kelton Global. In all, 54 people, age 13 to 34 years, from Chicago, Raleigh-Durham and Seattle were selected to complete 14-day journals chronicling the videos watched daily and providing information on habits and opinions. Twenty-seven of these youth were later interviewed in-person. The interviews were followed with an online survey of 1,300 youth considered representative of the U.S. population in terms of age, gender, ethnicity and education.

Among the key findings of the 2016 report is the importance of video consumption in a young person’s daily life — “as natural to them as the required dose of sleeping and eating.”

Convenience remains an important but not necessary precondition to viewing, with respondents sharing a high propensity for watching videos on a laptop or desktop (66%), though smartphones still reign (76%).

Among the most highly viewed video platforms, the report found that YouTube is the most popular platform, with 85% of respondents stating it’s their primary go-to service. But the cost of subscription or cable services is less of a barrier than some might think: Netflix falls just behind at 66% and TV at 62%. Facebook, another free, ad-supported service, came in with 53% of survey support.

But, when it comes to the sources viewers can’t live without, TV seems to be the first sacrifice. YouTube is the clear winner again at 67%, Netflix at 51%, with social media sources (Facebook, Instagram, Snapchat, Twitter and Tumblr) coming close at 48% . TV falls to almost half that of YouTube, with only 36% stating they can’t live without the traditional tube. 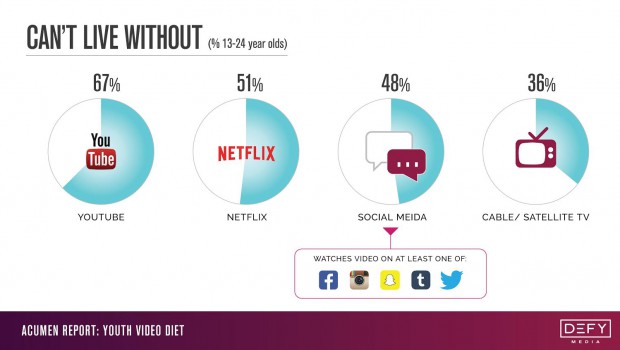 TV still has a role, but its limited options (i.e./scheduled programming) and the fact that many young viewers don’t see the content or personalities as relevant or relatable continues to challenge its place in their daily diet. According to the study, 38% of those surveyed stated they did not have a cable/satellite box. Among those that can afford cable, almost 20% said the cost is not worthwhile. Younger viewers say they watch TV because mom and dad pay the bill, but when they leave home, just 56% say they plan to subscribe to cable/satellite TV compared to 86% who plan to subscribe to Netflix.

When it comes to certain digital video connections, responses show Netflix is not the only service worth paying for: Among users, almost half (48%) report paying for a sports app, while Amazon gets support from 50% of youth, 55% for Hulu, and 56% for HBO or Showtime apps.

It’s important to note that age does make a difference: For younger viewers, ages 13 to 18 years, their next “must-have” is Vine. For the older set (19 to 24 years), Hulu and Blu-Ray/DVD show priority. 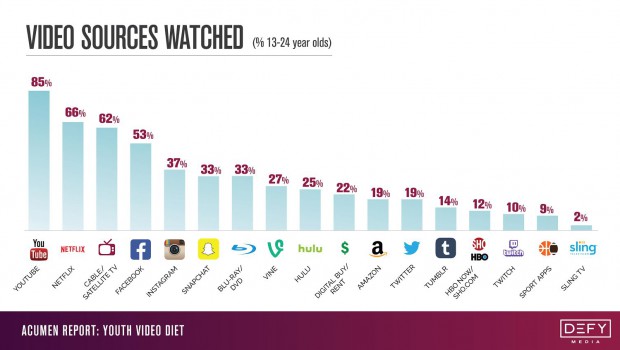 Among social platforms, 60% of viewers use Facebook for social and video versus 40% for social sharing alone. Video and social use of Instagram and Snapchat, meanwhile, is more even (48% vs. 52% for both), while Twitter and Tumblr have grabbed 31% and 30%, respectively, of the pie.

Twenty-four per cent say they watch videos featuring their favorite digital celebs, with that same percentage reported for videos with people they do not know personally, such as pranks or fails popular with this audience. When asked if they watch video of TV/movie stars, 11% said yes.

Last year’s Acumen report from Defy focused on the growing and significant influence of YouTube personalities, as well as viewer’s preference for content featuring these new digital celebs (for example, 43% of 13 to 17 year olds opened content featuring their favorite talents). The 2015 study also showed 63% would try a product or brand recommended by a YouTube star vs. 48% by a TV or movie star.

Tu said, this year, the study sought to dig deeper into that connection to uncover what messages resonate with viewers and what that means for advertisers in the space.

To that end, the study found nearly two-thirds of respondents (63%) said they understand branded content and the need of digital celebrities to have ads on their channels to make a living. More than half, 58%, say they don’t even mind watching those ads to support the creators they like best.

But how those ads are delivered still matters. While pre-roll continues to drop in favor,  just over half (53% ) are okay with that one-minute spots (though most (80%) still prefer a 15-second commercial ). The well-produced branded content or non-invasive intro/outro that rises to the top with this group. Nearly 90% of respondents said a 5-second intro featuring a brand sponsor is always or sometimes “okay”. That support dipped to 88% for the end screen, while 87% approve of product placement in a video. The same goes for digital talents actually demonstrating a product or calling out a sponsor.

“This is a pretty savvy (audience) that cares about the ad formats they see, and how brands partner inside or around the content they love dearly,” said Tu of what’s at stake.