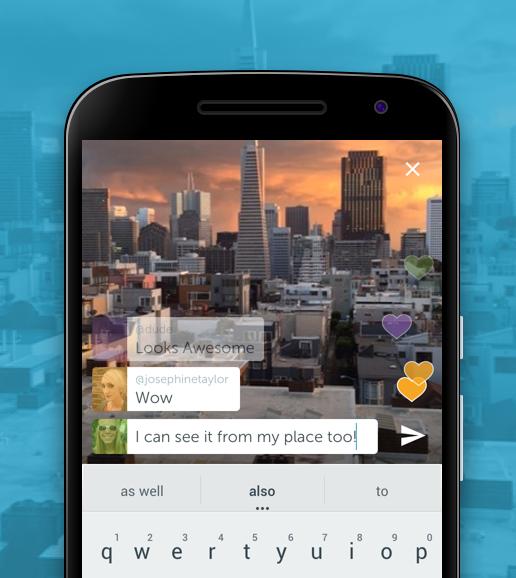 In its first year, the live-streaming app has recorded nearly one million hours (110 years) of live video watched over iOS and Android.

It’s hard to believe that just one year ago, “periscope” was a word thought of only in reference to submarines, and certainly not as a proper noun and an increasingly important member of the Twitter family.

But, as of March 26, Periscope (the company) celebrated its one-year anniversary. The milestone was marked by the team behind the live-streaming app with a blog post containing the latest broadcast numbers, along with the total amount of time spent watching live broadcasts on iOS and Android:

The time-watched figures (which translates to almost one million hours) do not include broadcasts within Twitter, on the web or replays.

Still, the numbers add up to positive news for the growing company, according to the team, who state in the post: “For everyone who joined us along the way, we hope this reaffirms that you are a part of something bigger. Thank you for making Periscope a vibrant global community– it means everything to us.”

The birthday comes just days after parent co. Twitter marked its 10th anniversary. The social network has grown its global influence to include 320 million active users, sending an estimated 500 million Tweets per day from desktop and mobile devices.

Last year, Twitter purchased Periscope, along with social media talent agency Niche, for about $86 million as it looked to move more actively into streaming video. The company also bought Vine in 2012.

Cameron Gordon, communications lead for Twitter Canada, told StreamDaily in an earlier interview that video is a critical element in Twitter’s ecosystem, especially for brands.

“It’s a great visualization, and we have statistics at the company that show that when a tweet includes a photo or video, your engagement increases by about 60%,” he said, adding Twitter will likely continue to invest in video.

Periscope originally launched around the same time as rival live-streamer Meerkat, with the two apps racing neck-and-neck for dominance in the initial months following their release. Earlier in March, however, Meerkat CEO Ben Ruben reportedly sent an email to investors stating that his company would bow out of the live-streaming space  and would instead shift its focus to social networking.

Periscope is not without competition, however. Facebook, YouNow and Streamup are among those vying for audience and advertiser attention. According to a June 2015 study by eMarketer, interest and usage in live-streaming remain relatively low despite the buzz, and that only 50% of internet users age 18-34 years are interested in using a live-streaming mobile app. That number, nowever, is expected to grow.