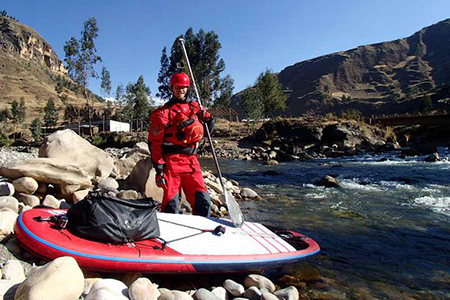 The media co has ordered the 60-minute documentary PaddleSUP: Mission Amazon, which will roll out on the company's SVOD.

The 60-minute special will follow adventurer Charlie Head (pictured) on a two-month journey across the Rio Marañón in Peru – the Amazon’s main water source – in what is said to be the first-ever attempted stand-up paddleboarding of the river.

The film will shadow Head along his expedition, intended to highlight one of the world’s most endangered environments. Throughout his adventure, Head will meet with Amazonian locals who are fighting the planned building of 20 new dams believed to threaten the entirety of the Amazon basin.

“The Amazon basin is one of the most important ecosystems in the world, so to have the opportunity to help shine a light on both its beauty and the very real threats it is facing has been an incredibly fulfilling venture,” said Kirstie McLure, MD of Pioneer Productions, in a statement.

Editor’s Note: A previous version of this story incorrectly stated that the series would appear on linear channel Red Bull TV. The series will only appear on its SVOD service Red Bull TV Online.