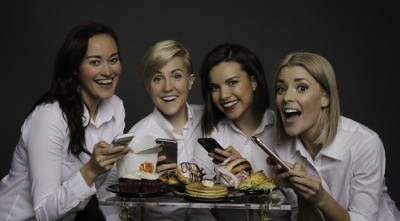 Dysh enlists the help of online creators for promotion

What’s the best way to promote a new app? Teaming up with a group of influencers who, together, boast a total of 10 million YouTube subscribers is a good start.

Mobile app startup Dysh, which lets users find, share and rate individual menu items at restaurants near them, has enlisted the help of YouTubers Hannah Hart, Mamrie Hart, Grace Helbig and Ingrid Nilsen to promote its app. The four vloggers (known by Dysh as the “taste buds”) are now the official faces of the app on its social media pages, while simultaneously promoting the app through their own social media pages.

Breaking News: Mysterious bowl of orange at Korean BBQ turns out to be not the worst! #DyshApp https://t.co/BwgiWjdGwJ

Most of the influencers are no stranger to the food and drink vertical — Hannah Hart first skyrocketed to online fame through her flagship series My Drunk Kitchen, and Mamrie Hart (not related to Hannah) hosts her main channel, You Deserve a Drink, which features the vlogger creating unique cocktail recipes, often collaborating with other influencers (such as Tyler Oakley). Perhaps the most immersed in the food world is Nilsen, who often posts recipe videos (such as smoked salt chocolate chip cookies and mini quiches) alongside her lifestyle and DIY content.

While it’s still a young app, partnering with the YouTubers may be paying off already. Hannah Hart reported on Twitter that Dysh became the 16th most-downloaded app in the food and drink section of the iTunes app store for the week ending March 18, just one day after the partnership was announced.

But Dysh is not the only app to capitalize on the popularity of foodie content online. YouTube co-founder Steve Chen recently announced the launch of Nom, a live-streaming engine dedicated to culinary content, and Twitch, known mainly as a gaming site, recently expanded to offer a food vertical.