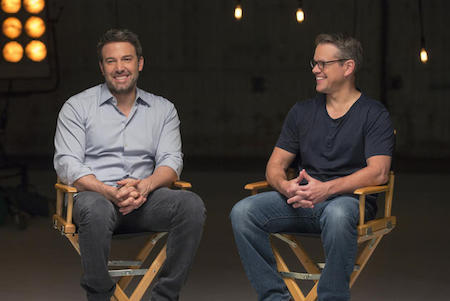 Ben Affleck and Matt Damon are teaming with Pilgrim Media Group and Adaptive Studios on the mobile version of the reality competition.

Ben Affleck and Matt Damon are teaming with Pilgrim Media Group and Adaptive Studios (Project Greenlight) to produce a mobile-first reality competition series that will premiere on Verizon’s go90 platform  this summer.

The Runner is billed as the first “broadcast-quality competition series” to be produced for a social platform.

The mobile edition of the series will run over 30 days through three daily five-minute installments. Episodes will blend VOD elements and live streaming.

In the series, one individual must make it across the U.S. unnoticed over 30 days while teams dubbed “chasers” will use “all available technology” to locate the person. At stake is a one million dollar prize for the so-called “runner” and the chase teams who are part of the show format.

In addition, go90 users who provide tips, sightings and evidence of the runner’s location are also eligible to win money. It’s that ability to engage with the programming that makes the series a good fit for go90, a Verizon spokesman told  StreamDaily.

“The go90 platform is inherently social and users will be able to really tap into that functionality with this content,” he said.

The go90 version of The Runner is the latest iteration for the series, which was originally set to air on ABC in 2000, but was pulled after the events of Sept. 11, 2001. The project then moved into development at Yahoo in 2006, when former ABC chief Lloyd Braun moved to the web company to head its media group.

“This show is exactly the kind of series Pilgrim is known for,” Piligian said in a statement. “The Runner integrates real high-stakes competition, live elements, a need for speed and the ability to fight and persevere. It’s incredibly exciting to produce something this complex, and we’re thrilled to be in business with Matt and Ben, Adaptive, and our partners at go90 to do it.”

“This is an excellent format for a brand new platform,” added Adaptive’s Joubert. “The Runner is our way of meeting a millennial audience where they live – on their smartphones and on social media.”

Casting for the upcoming series is underway via www.therunnercasting.com. The project was packaged by WME.

Story from Realscreen, with files from Darah Hansen