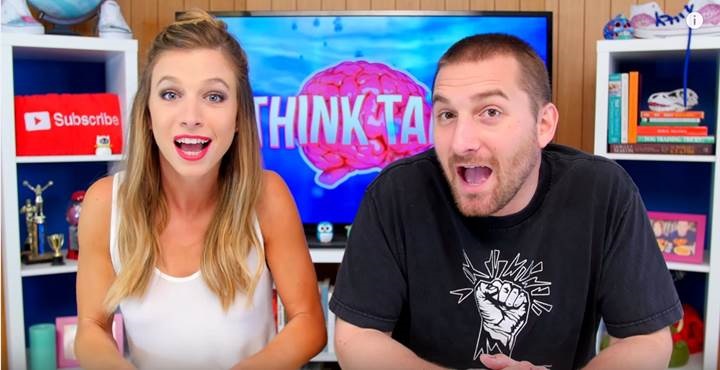 As millennials grow up, The Young Turks' newly rebranded channel strikes a cord with a broader, Buzzfeed-like take on big ideas and new technology.

Almost anyone who’s spent some time in an university or college classroom will know the very particular kind of joy that comes with being exposed to big ideas and beliefs that you just can’t seem to find anywhere else.

Bottling some of that magic is exactly the strategy behind The Young Turks’ recently rebranded show ThinkTank. Formerly known as TYT University, ThinkTank launched on TYT’s YouTube network in January 2015 offering a fresh take on youth-focused news, technology and education issues and a fresh face in Hannah Cranston, 25, who joined veteran TYT host John Iadarola, 33, at the helm.

“The fans loved to joke, especially after the first year of me hosting TYT U (in 2012), that I was clearly not college age anymore, so they would joke and say, ‘Oh, he is reliving his college years,’ and I realized that they were sort of right,” said Iadarola in an interview with StreamDaily on the drive to change up the channel.

“I realized that rather than just talking about colleges, I would rather make the show fulfill for me what being at college is about, which is being exposed to new information and cool new technologies and new scientific research, and different perspectives from around the world. By covering that material every day, Hannah and I can effectively stay in college for the rest of our lives,” he said.

Whatever the reason, the move has certainly reaped rich rewards. Earlier this month, ThinkTank tipped over the one-million subscriber mark – becoming only the second channel in the TYT network to hit that milestone. (The network’s flagship show, TYT, hosted by Cenk Uygur and Ana Kasparian, has 2.7 million subscribers on its dedicated YouTube channel).

“The first time we shot (the show) after passing the millionth mark, I was saying something about how I didn’t like my hair that morning and John was like, ‘It’s okay. Only a million people will see it.’ And I stopped because it sounds hyperbolic, but it’s true for us right now and that is pretty amazing,” said Cranston of the show’s rising popularity.

The milestone means ThinkTank‘s subscriber base is more than double the number the show earned under the University banner, despite University‘s much longer run (from 2011-2014). From launch to the end of 2015, ThinkTank added 425.5 million subscibers to University‘s nearly half-million mark, and 525 million from Jan. 1, 2016 to today, according to TYT statistics. The show’s new format has also seen 50% growth over University‘s video views and minutes watched.

While University stuck close to issues that touched on campus life – tackling everything from college protests and student loan debt to lifestyle, dating and fashion advice, ThinkTank takes a broader, Buzzfeed-like focus on curiosity-piquing ideas, and trending topics and theories (like “The 7 most bizarre ways people have injured themselves” and “Obama’s gun-control action explained”).

It’s no coincidence that the rebrand comes as even the youngest millennials age out of post-secondary and tackle new life milestones from finding careers and making big-money real-estate purchases to getting hitched and having children.

When University launched in 2011, the idea was to appeal to a school-age demo between 13 and 25 years. ThinkTank still holds sway with that young audience, though the majority of watchers are slightly older — between 18 and 24 years. The channel is also growing its influence in the 25 to 34-year-old bracket. About half the views are from outside the U.S.

In addition, ThinkTank has seen an uptick among female subscribers. While TYT U managed a 70-30 male/female split, ThinkTank’s seen that ratio move closer to 55-45.

“That, to me, was a personal win as a woman,” said Cranston.

The demographics undoubtedly help drive content choices, said the co-hosts (pictured), as do traffic metrics, with stories touching on trending issues or returning to topics that have done well in the past.

But, said Cranston, “what I recommend to anyone who is launching a channel on YouTube, is to pick stories that you are personally interested in and passionate about. That is something I always keep in mind when I am putting together an (episode) rundown because the video is not going to do well if John and I are bored talking about it.”

Cranston also attributes much of the show’s success to the on-air chemistry with Iadarola.

“Yes, I think the increase in content we were putting out contributed a lot to the success, but YouTube is very personality based, so I joined the team and John and I had a ton of fun, and that comes across on camera and people want to be part of that fun and want to laugh with us and learn with us,” she said.

ThinkTank shoots Monday through Thursday, with extra clips added to the site daily. The channel is monetized through TYT’s hybrid model, which includes a combination of paid memberships, brand integration and ad deals.

As for Iadarola and Cranston, they are still trying to digest the full impact of being members in the million-subscriber club.

“Why does something have to cost $9.99 instead of $10? For some reason, these things do matter,” said Iadorola. “I watch a lot of YouTube channels and for some reason, 700,000 subscribers doesn’t really seem like a lot, but one million, you definitely feel more established. It’s this important threshold that makes you feel that you’ve been accepted by the YouTube audience.”