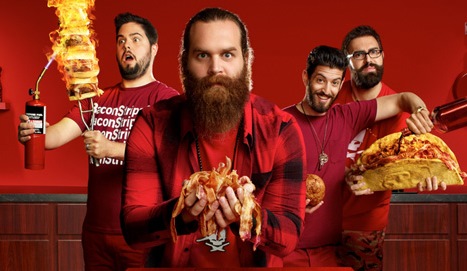 Epic Meal Time creators to develop comedy for the CBC

NextTime Productions' Darren and Harley Morenstein are set to jump to linear screens in Canada - but there's no bacon strips in this scripted series.

NextTime Productions, the prodco co-founded by Darren and Harley Morenstein (creators of the bacon-fueled YouTube brand Epic Meal Time), has inked a development deal for a new scripted series with Canadian pubcaster CBC.

The deal is the result of the Canadian Film Centre’s Jumping Screens Comedy Workshop, which was established to help online influencers prepare pitches for linear concepts. NextTime Productions participated in the program alongside singer and comedian Mikey Bustos, Conversations With My Two-Year-Old creator Matthew Clarke and director David Milchard. (At launch, lifestyle and comedy vlogger LaToya Forever was confirmed to be participating in the program, but bowed out after learning she was pregnant with her second child).

The CBC came on board the project in a separate partnership with the film center, with the pubcaster agreeing to develop at least one of the concepts into linear series.

Ultimately, NextTime was selected by the CBC because of its well-known personalities and massive appeal among millennials, according to Ana Serrano, chief digital officer with the Canadian Film Centre.

“In terms of Epic Meal Time, the Morenstein’s are one of the biggest YouTube successes in Canada. It almost seemed like a no-brainer,” Serrano told StreamDaily.

But for those expecting that the new linear series will be filled with turducken (a turkey stuffed with duck stuffed with chicken) and bacon strips may be in for a surprise. NextTime’s new scripted series, Elebrity, follows slacker Herschel Bock, who struggles to deal with his new life after he becomes a celebrity overnight.

It’s similar to the Morenstein’s own experience in the five years since Epic Meal Time exploded onto the online scene. Showcasing over-the-top, calorie-filled culinary creations (including a cheeseburger made of 84 smaller cheeseburgers, chicken wings fried in Cristal champagne and a literal couch potato, which boasted a calorie count higher than many YouTubers’ subscriber tallies), the EMT brand has skyrocketed to fame, earning more than seven million subscribers across its three YouTube channels. They’ve also released two cookbooks and several other web series alongside Epic Meal Time.

It was that scale that Serrano said gave the NextTime team the edge with the CBC.

“While (the prodco) wouldn’t have been picked up simply because they have a very large fan base — the pitch was very important — the intention was to work with talent that has developed an engaged fan-base,” she said.

NextTime Productions will co-develop the series with Toronto-based indie prodco Aircraft Pictures. There is no set premiere date for Elebrity.

Serrano said the film center will continue to work with Bustos, Clarke and Milchard with the pre-development of their series and pitching them to other broadcasters.

“We’re pretty confident that all of these series will find a place,” she said.