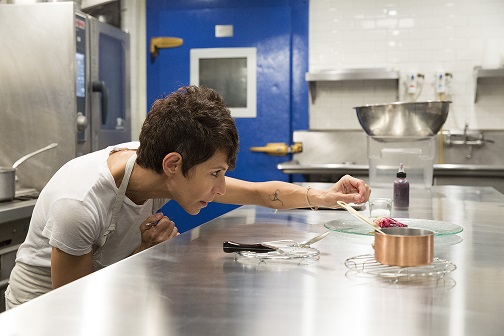 The first six episodes of season two are set to drop on the streaming service May 27, featuring six prominent chefs from around the world.

Netflix has given the greenlight to three new seasons of the unscripted culinary hit, Chef’s Table.

The first six episodes of season two are set to drop on the streaming service May 27. Following the same format as the premiere season, the new episodes will each feature a prominent chef from around the world talking about what inspires them and how it translates into their individual styles. Season two will feature Alex Atala (Brazil), Ana Ros (Slovenia), Dominique Crenn (U.S.), pictured, Enrique Olvera (Mexico), Gagan Anand (Thailand) and Grant Achatz, Alinea (U.S.).

That season will be followed by four “special” episodes later in the year dedicated to four of the world’s most renowned French chefs, including Alain Passard (L’Arpege), Michel Troisgros (Maison Troisgros), Adeline Grattard (Yam’Tcha) and Alexandre Couillon (La Marine)

The third season highlighting another six chefs is scheduled for release in early 2017.

“We are thrilled to continue our partnership with David Gelb and his team. We couldn’t think of a better way to follow such a visually stunning and engrossing first season than to profile 16 more exceptional chefs and to share their deeply personal stories with our members around the world,” said Lisa Nishimura, Netflix VP of original documentary programming, in a statement.

The show falls in line with Netflix’s strategy to offer exclusive content that appeals to a global audience following its international expansion to 130 new countries earlier this year.