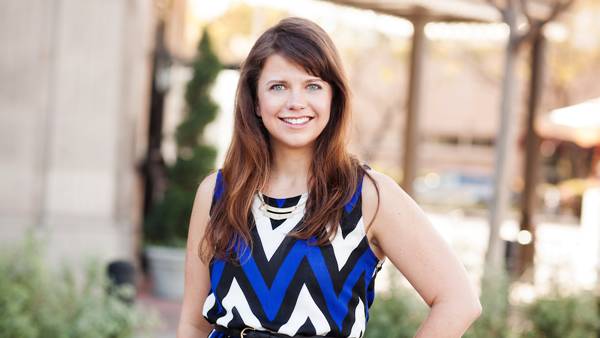 Kathleen Grace on creating content in a multi-platform universe

The chief creative officer at New Form Digital shares on how to keep pace in a fast-moving industry and making programming audiences love.

Here’s the thing about the world of digital video: it’s evolving so quickly that even the players whose very existence was determined by the digital upheaval have to run to keep up.

Fortunately for Kathleen Grace,  it’s a pace she appreciates. The chief creative officer for New Form Digital is fresh off the prodco’s latest project, Replay, a short-form comedy series headed to Verizon’s Go90 service this year and already thinking about what else is in the works.

The 12-episode series, created and co-written by Grace and Shawn Dempewolff and featuring a blend of linear television and online stars (such as YouTuber Mamrie Hart), marks New Form’s second series for the mobile-first entertainment platform, and is one of several productions underway (or recently wrapped) for various digital platforms, including YouTube, Maker Studios and the CW Seed.

Not bad for a company that is just two years old. (New Form was launched by Brian Grazer and Ron Howard in 2014.)

But that’s the reality of the new landscape. With more opportunity than ever before in the way of platforms and partners, not to mention a burgeoning crowd of competitors into the space, this is no time to sit back and take a breather.

“Obviously, with competition, it’s intimidating,” said Grace. “But I kind of want everyone to succeed because it will continue to grow the marketplace.  I look forward to seeing who moves forward with us.”

So what does it take to survive amid these moving parts and players? Grace shared her thoughts on what’s working right now for New Form, keeping productions on budget and walking the delicate line between the creative and analytics in a multi-platform universe. The following is an edited transcript of that Q&A:

Everyone talks about the opportunities in digital, but then worry that there is no money in it. What are you seeing in terms of programming budgets?

Ad-supported platforms (such as YouTube) tend to have smaller budgets than subscription platforms (such as Seeso), but the AVODs also have maybe a bigger audience. It really varies from platform to platform. How old is the platform? Or are they part of a large corporation like Google or Verizon? That will impact how much the platform can invest in original content.

The interesting thing is, because we are exploring new formats and new structures for the (slate of New Form) series, we can fit the right show for the right budget for the right platform and to me that is a really exciting opportunity. Sure, I am a producer and I would love to have a giant $100-million budget, but I also think there is something valuable about creating a really great show that is appropriate for the platform it is on and sometimes that does mean having a lower budget.

What comes first? The pitch, the platform or the budget?

People are going to consume content in a different way on each platform. So, for me, it really is about thinking through what is the best series for this platform and then looking at the budget they have and then tweaking from there. But, always, stories are at the heart of every one of our decisions. Stories and the talent and the audience and what they want, and we move on from there.

What are some of the nuances between those platforms that you have to keep front of mind when developing content?

On YouTube, (the questions are) ‘What is the related video? How did people discover it?’ Those are all the things I learned to think about while working at Next New Networks (where Grace worked as VP of production and programming. the company was acquired by YouTube in 2011) and at YouTube (where she worked as head of creative development for YouTubeSpace LA). It is really about search, social and discovery. How do people find content on YouTube? How do they consume it? What does well and why?

Of course, the crazy thing is, each of these platforms are going to change. Snapchat is always replacing new functionality, as well as YouTube and Go90. The one consistent thing across all digital platforms is that they are always changing. It is not a set technology, like television. The remote (control) was a big change for television. A change like that happened to TV every decade, a change like that happens to a digital platform every quarter. It is a very evolving thing.

I think producers are not going to learn how to tell stories for these platforms unless they do it, learn things, iterate. There is no one thing that I can say today that is going to be true a year from now and that is the biggest lesson they can learn. That mentality is a big enough shift for video producers and storytellers. Just know that it is always going to change. It’s kind of fun.

Does data play into your creative decisions?

Absolutely. We look at talent that is rising on social platforms. We look at trends we see online, and we are constantly begging our partners for more data and more data more data, so we can know. Some platforms give you access to more data than others. People who make shows for Netflix are always complaining that Netflix is not transparent enough with its data. YouTube is incredibly transparent about their data. You have an entire analytical backend that you can use. We always want more of that. Does it completely dictate our creative? No, but does it help us educate ourselves.

What exactly are you looking for?

‘Is there content or an array of people that you can build a community around? Is there a really hyper-engaged community online that we can be a part of or that we can be a part of that conversation?’ That is the consistent thing we are looking for. Is there a community around this filmmaker ? Creator PJ Liguori is a good example. We worked with him on Oscar’s Hotel for Fantastical Creatures (now on Vimeo). He had a really engaged community around him. People who loved making fan art of his short films, people who really saw themselves as tiny planet explorers. That is the kind of community we like to collaborate with. I don’t even want we make stuff and we give it to them. We make stuff with them. We couldn’t make our shows if they didn’t exist and that attitude of being a part of a community is what  drives what we look for in data.

Do you rely on data to help shape a show even as you create it?

They can change a lot from pilot to series – part of that is creative process, part of it is we bring in new collaborators to work with our filmmakers, and the platforms, obviously, have creative options and points of view that they contribute. Some of it is also, ‘What did we learn from the pilot’ and ‘What did we learn from the data in the pilot?’

One big thing we learned in our first round of pilots (in 2015) is that we can actually make them longer episodes. The audience is watching the whole thing and really sticking around. That is why we have longer episodes than we did in the pilot version of Replay.

You are referring to the series that you just finished shooting for Go90?

Yes. Some of the episodes are going to be longer than what the pilots (for previous programs) were.  We are looking at 10 to 15 minutes. For some of the other series, they were as short as seven minutes. So, they could be longer and we are less afraid  to go in that direction.

We are not seeing that. Our episodes for The Fourth Door for Go90, I think the shortest (episode) was seven minutes and the longest was maybe 12 minutes, and we are seeing really great retention rates on those. People are watching the whole thing.

Does it help the search element of the programming formula you mentioned earlier when you have strong social reach from the outset through your cast?

Absolutely. The same way that you have when you have a (movie) star in your box office draw. That helps you stand out. If you have someone with a social following or an engaged fan base, you are going to stick out more in their fan feeds. This isn’t like we are re-inventing the wheel. It is to some extent in the tactics in how we are approaching it, but a lot of it is kind of the same, but a little bit more refined because we have access to more data and hard data around it.

How often are you working with brands?

We try to think of how brands can be integrated in our series, absolutely. I think we let the filmmaker and the story drive the creative decision.

We have done a few projects with brands. We did a great series with 10 doc films with Tylenol last year that was really popular. But that was more creatively developed in partnership with Tylenol — really working with them and their agency J3 to really figure out what the best story for Tylenol is. That kind of collaboration is something I look at as another way of being creative.

I think when we are thinking about our own series, we are certainly not going to develop something that a brand would never sponsor because it is too violent  or controversial. We are still in a world where ad-supported platforms are buying our content. But on Refinery29, our series was called Shitty Boyfriends and it got a sponsor. It was because it was really funny, and they liked it and it didn’t matter that it had ‘shit’ in the title.

What comes first: the brand partnership or the creative?

We know brands will potentially be sponsoring these series so we think about that. And also when we are really engaged with a brand then the brand really shapes the creative. We really worked closely with Tylenol and it was a very satisfying experience. That seems to be the real future for brands. Brands are looking for creative ways to integrate into content.

I think it is a huge opportunity for New Form to work with brands to help them discover the right stories for them, but is also a huge opportunity for brands to build the right audience on platforms. You look at GoPro, Redbull, Marriott — they are really leading the charge in creating a conversation with their fans, not just their customers. Their fans. People who really love Redbull, or GoPro. They are not just customers anymore.

I think this generation of consumers, millennial and younger, understand that and don’t feel bad about loving a brand and so they may want to watch a movie presented by Tylenol.

How well did the Tylenol series do in terms of attracting an audience?

I was very proud of them. (Actor) Kristen Bell tweeted about one. I thought that was cool. She just thought it was a good film, so I am happy.