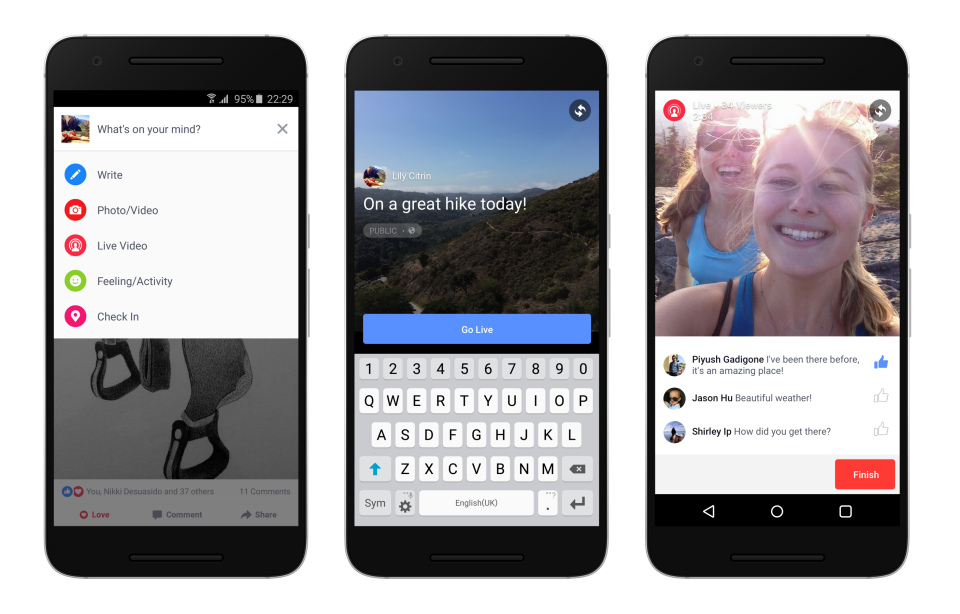 Since launching on U.S. iPhones, live streaming has garnered triple the number of views compared to archived video, according to the social giant.

Facebook is moving further into the live-streaming world with the addition of the feature to the Android app and planned roll-out to iPhone users outside the U.S.

Since it first launched the streaming option on U.S. iPhones one month ago, the social media giant reports that users spent triple the time watching live videos that they do watching archived videos. Half of those live video views coming from Android users, according to Facebook.

Facebook also plans to offer the iPhone live stream to an additional 30 countries, though no timeline for that roll out has been made public.

The company announced both moves in a blog post. The Android feature will appear with the latest app update.

The move is not unexpected. Facebook has always promised it would deliver live stream capabilities to Android users and expand internationally. However, the speed of the expansion speaks to Facebook’s aggressive push to video as it looks to stay relevant with its more than one billion daily users.

The platform has made no secret of its goals to become a video destination. It already sees a self-reported eight billion video views per day (it’s worth noting that Facebook has been accused by some, notably YouTuber Hank Green, of misrepresenting the number of video views it sees, using its autoplay feature to count false video views).

Criticism aside, Facebook does appear to be making strides in video — particularly in its ability to attract advertisers. Beautycon Media CEO Moj Mahdara said in a recent interview with StreamDaily that influencers in the beauty vertical, for instance, are creating an increasing amount of Facebook-native content because the platform “has done a very good job of making brands feel comfortable in that ecosystem.” Mahdara said much of that success is due to the layout of official brand pages, which allow direct shopping links to be embedded. YouTube and Instagram have also made their videos and photo posts “shoppable” in the past year, but major live streamers like Twitch and Periscope have yet to embed that feature.

Beauty isn’t the only vertical invading the Facebook space.OK Go, the indie rock band that rose to fame via YouTube, recently uploaded their latest music video directly to Facebook instead of YouTube. “Upside Down and Inside Out” has been viewed more than 48 million times since its post on Feb. 11. The band’s first viral music video on YouTube, the “treadmill dance” to “Here it Goes Again”, has received more than 52 million views since its release in 2006.

Official brand pages have been able to use Facebook’s live streaming features for some time now, although the company has not disclosed how many pages are actively using the feature, or total live stream views.