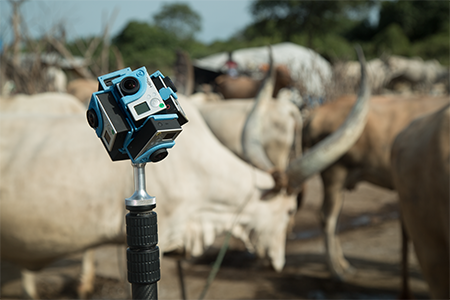 The South Sudan-set film On the Brink of Famine is Frontline's second foray into VR content, but its first on Facebook.

PBS investigative doc strand Frontline is readying the launch of its latest VR project for Facebook 360.

The South Sudan-set doc On the Brink of Famine (pictured) was filmed with 360-degree cameras and brings audiences to the center of the country’s hunger crisis, affecting millions. The film is to be released in stages, with the first installment following a critical plane journey to deliver food to those trapped in the swamp lands of South Sudan.

A second 360-degree video, set to publish on the Frontline Facebook page later this week, will delve into the South Sudan’s largest displaced persons camp, inhabited by more than 120,000 people. A third part will examine a Doctors Without Borders clinic for children suffering from acute malnutrition.

The film — to be posted in full on the ‘Frontline’ Facebook page on March 1 — was directed by Evan Wexler, Marcelle Hopkins and Benedict Moran.

On the Brink is supported by Frontline as well as a “Magic Grant” from The David and Helen Gurley Brown Institute for Media Innovation, a collaboration between Columbia and Stanford Universities.

Additional backing came from The Ford Foundation’s support of ‘Frontline’s’ Enterprise Journalism Desk, and through a JustFilms Fellowship from the organization.