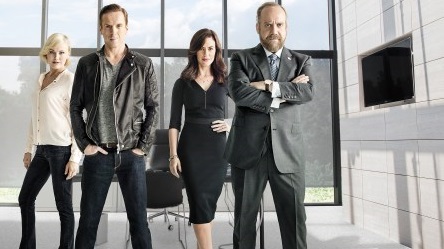 The agreement gives Aussie viewers access to hundreds of hours of programming, including originals like Billions and the Twin Peaks reboot.

CBS Corporation has finalized a content deal with Australian VOD provider Stan that will bring Showtime programming Down Under.

The agreement makes Stan the official home to all future Showtime series, along with hundreds of hours of CBS programming. It also provides Stan with an exclusive licence to the Showtime brand and trademark.

The deal kicked off this week with the premiere of Billions in Australia, following its Showtime debut in the U.S. linear market. Billions, a drama starring (pictured left to right) Malin Akerman, Damian Lewis, Maggie Siff and Paul Giamatti , premiered Jan. 17. With an audience of nearly three million, it is the network’s most-watched original series debut across platforms.

The 12-part series was created, written and executive produced by Brian Koppelman and David Levien (Ocean’s Thirteen, Rounders) and Andrew Ross Sorkin (Too Big to Fail).

After this week’s premiere of Billions on Stan, new episodes will be available in Australia day-and-date with Showtime in the U.S.

Also coming to Stan will be critically acclaimed hits such as House of Lies, The Affair, Penny Dreadful, Ray Donovan, Dexter and Californication. Current rights with other platforms will remain unchanged,with series migrating to Stan for SVOD as permitted when existing commitments expire, according to a media statement from the network.

In addition, the deal will also include exclusive streaming rights to CBS series such as Madam Secretary, Limitless, Elementary, Scorpion, Under the Dome, Extant, Beauty and the Beast and Reign. Every episode of every Star Trek television series will also be available on Stan.

In 2017, Stan will exclusively premiere Showtime’s Twin Peaks, a reboot of the 1980s series  from creators David Lynch and Mark Frost.

The agreement comes as Australian SVOD providers fight for viewers in a crowded market. Since the launch of Netflix in March 2015, there are now four big players in the country, including Quickflix, Presto and Stan.

Stan launched a year ago with a mix of TV shows, documentaries and movies, and is priced at $10 AU (about $7 U.S.) per month. It’s co-owned by Nine Entertainment and Fairfax Media.

According to Mike Sneesby, Stan CEO, more than 1.5 million Australians have sampled the service since the launch, with the company securing 700,000 subscriptions. A recent study by the Australian Communications and Media Authority estimates that 3.2 million adult Australians (about 17% of the population) stream video content. Netflix accounts for the majority of those users (2.5 million).

For CBS, this marks the second expansive licensing agreement announced for Showtime outside the U.S. in less than a week, and a continuation of a global expansion strategy to distribute the Showtime brand and content as a bundled offering to major international platforms.

Similar exclusive deals for Showtime have been announced with Sky in Europe and Bell Media in Canada.

“The growth of SVOD services internationally has created a huge demand for premium content globally. Showtime’s prestigious brand and growing portfolio of programming align perfectly with this marketplace,” said Armando Nuñez, president & CEO of the CBS Global Distribution Group, in a statement.