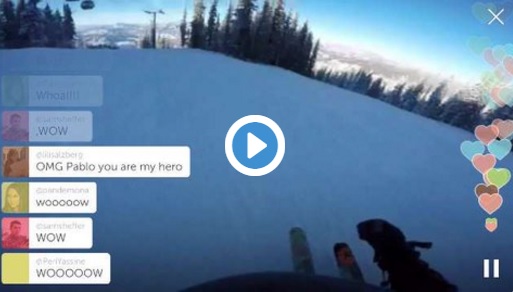 Users can now live-stream content from an external wearable camera - instead of a smartphone taped to a drone or submerged underwater.

Little more than a week after fully integrating live-streaming app Periscope into its feed, Twitter has now partnered with GoPro to allow users to stream video from the wearable cameras.

Periscope, which was acquired by Twitter in 2015, announced the partnership in a blog post Jan. 26, where it detailed how the broadcasts will work, along with some of the reasoning behind the new feature. (Hint: It has a lot to do with keeping your smartphone safe from potential disaster.)

“We’ve seen people put their phones in some precarious situations — they’ve been taped to drones, tied to balloons and submerged underwater,” the company states in the post.

With the new function (which only works with GoPro’s newest model, the Hero 4), users can open Periscope on their iPhones and capture action footage, such as white-water rafting, ice climbing or even footage from a drone, through their GoPro. The connection is made possible through the cameras’ ability to connect to wifi and can be discovered as an external device on mobile phones. The cameras will still have to be within range of the phones, but can be stored away in a pocket or bag.

According to Cameron Gordon, a communications rep for Twitter Canada, Periscope  has amassed more than 100 million broadcasts.

Live streaming is considered to be one of the biggest trends in streaming in 2016. Major video platforms like YouTube, Twitch and Facebook have all beefed up the streaming quality and content offerings of their live-streaming capabilities in the last year. New platforms such as Kanvas, Stage Ten and Streamup have also launched, hoping to capitalize on the increasing interest in live broadcasting as users look for a more immediate, yet low-maintenance way to engage audiences online.