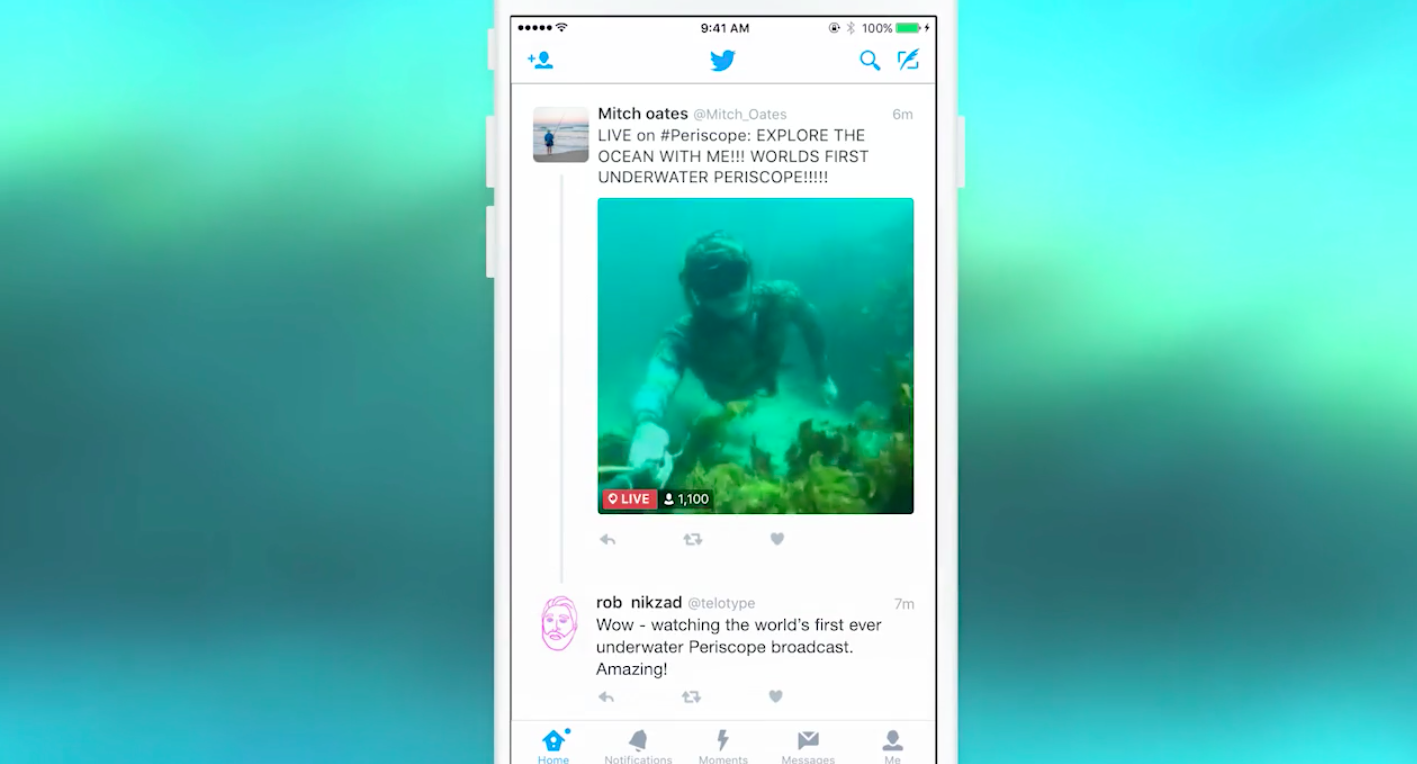 The social media giant aims to create a more cohesive app experience, as the live-streaming market continues to heat up.

Twitter has officially embedded its live-streaming feature directly into its platform.

Originally launched as a separate app, Periscope was purchased by the social media giant in the spring of 2015. It’s since operated as its own entity requiring users to download the app in order to broadcast or watch content. There’s been some limited integration until now: Twitter users are notified when someone they follow begins a live stream, for example, while broadcasters can post links to their live feeds.

However, unlike Vine, Twitter’s short, six-second video platform, Periscope users haven’t been able to post their streams directly to the social site. Instead audiences have had to flip between Twitter and Periscope. Those without Periscope accounts can’t watch the content. Despite this, however, the platform has amassed more than 100 million broadcasts (live streams), said Cameron Gordon, communications for Twitter Canada.

The plan always was to integrate the feature into the Twitter app itself, allowing for auto-play (like it does with Vine content). While this is only available on iOS at the moment, the functionality will be coming to Android devices soon, according to a release.

The integration will help Periscope grow its user base, which has been skewed towards brands (particularly in the fashion space) and early adopters, he said.

The move from Twitter comes after competitor Facebook had its live-streaming feature (first rolled out to celebs, before being offered to the general pop) directly embedded into the app.

Live streaming is considered to be a huge growth area for 2016. A number of companies, including Streamup, Kanvas and Stage Ten are hedging their bets against the need to see people broadcast live, while more diversified video sites like YouTube and Twitch have also beefed up their live-streaming capabilities as of late.

“Maybe it’s our instant-gratification culture, or maybe it’s FOMO (fear of missing out),” said Will Keenan, president of Streamup, and former president of Endemol Beyond USA, in a previous interview with StreamDaily. “We want what content we want anywhere and now we want it immediately. Reality TV was criticized as having become less real, and when viewership of reality shows began to diminish, it seemed the eyeballs went online to watch what were the ‘new reality stars,’ the online vloggers, whose genuineness and authenticity resonated with online audiences. And now, there’s nothing more authentic and genuine than going live. There’s no editing, anything can happen, live streaming’s as real as it gets, and such elements of truth always seem to resonate with the whole of humanity during any era.”

with a file from Darah Hansen, StreamDaily