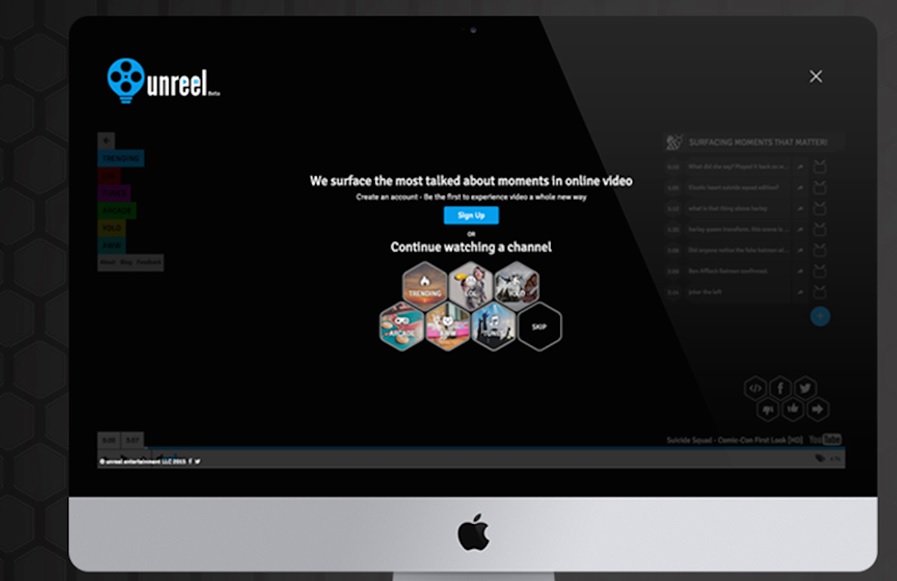 UnReel uses artificial intelligence to track viewing habits and video trends, which it hopes to use to improve content discovery.

Social video start-up Unreel has just raised $1 million in a round of financing led by Digital Ignition, with additional contributions from Poise Ventures and angel investors Adam Yarnold, Gordon Whitener and Jackson Huynh.

The video site, which was founded in 2015 and is currently in its beta stages, curates video content from multiple platforms around the web such as YouTube, Facebook, Vine and Instagram. Using an artificial intelligence bot it created to track user trends and video data, the site serves to help users discover videos based on their tastes and what they are looking for. It divides content by genres and trends, and allows users to skip past videos they don’t like and onto the next, using the data gathered from those actions to deepen its recommendation system.

“There are hundreds of hours of videos uploaded to YouTube, Snapchat, Instagram… every minute,” UnReel co-founder and CEO Dan Goikhman told StreamDaily. “There’s only going to be more and more going forward. We think the way you navigate and discover content should change.”

He said he envisioned the site to be “a Wikipedia for videos,” allowing users to fall down a rabbit hole of content, clicking from one video to another as their interests shift.

Its user-base is modest so far — 100,000 average monthly users, according to the company — but it is growing, and has struck partnerships with digital content studios and MCNs including Malka Media, GTChannel and Surreal VR to promote and feature their content within its line-up. It also generates revenue through its data mining and user trend services. Goikhman said the company plans to reveal new revenue tools, as well as publishing tools for additional revenue generation in the coming months.

As for the platform itself, Goikhman admitted most users are still attached to stalwart platforms like YouTube and Facebook, and said the company trying to strike the balance between trying to get viewers to adopt new habits — like going to a whole new site for videos — and capitalizing on current habits. For the most part, he said, they lean toward the latter.

“Right now, we’re using our (curated) content to test our theory that the other platforms out there are great for building an audience, but they’re not necessarily great for discovering new content all the time,” he said. “We don’t view what we do as changing behavior, but rather learning how to make the most of people’s existing behavior, and using that data for our partners.”

UnReel isn’t the only company that has content discovery top of its mind. Digital studio Secret Location recently created a new online video player, DitchTV, which allows users to choose content by selecting a human-curated channel like comedy, animation or music. They can then swipe through the content (much like they swipe through dating profiles on Tinder).