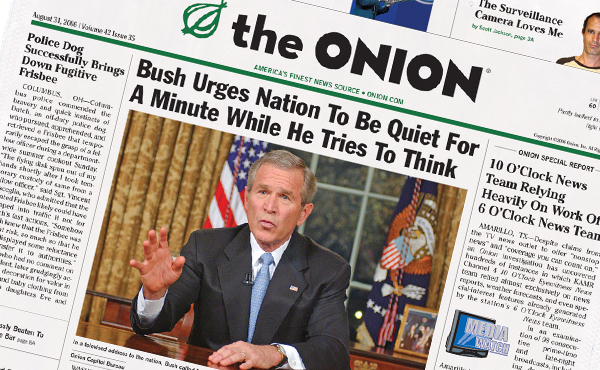 Univision invests in The Onion

The digital arm of Hispanic and Latino-focused media company Univision Communications has made a strategic investment in Onion Inc., owner of online satire brand The Onion.

Terms of the transaction were not disclosed, but Univision’s digital arm has been identified in a press release by Univision as a “minority investor.”

The reach of The Onion and its sister publications — particularly among millennials — will certainly be a benefit to Univision. According to Univision, Onion Inc. boasts a monthly audience of more than 25 million unique visitors. On top of its flagship comedic news source The Onion, Onion Inc.’s brands include pop culture site The A.V. Club, clickbait parody site ClickHole, satirical celebrity gossip site StarWipe and its digital video network Onion Studios. Together, The Onion, The A.V. Club and ClickHole‘s YouTube channels boast just under one million subscribers.

The satirical news site’s material has always fared well among socially conscious millennials, with biting headlines such as “(Marco) Rubio refutes claim he soft on immigration by dragging undocumented worker he knocked out cold onto stage,” “‘This will be the end of Trump’s campaign,’ says increasingly nervous man for seventh time this year” and “Nation celebrates full week without deadly mass shooting” (“Update: Never Mind.”)

Though the Chicago-based Onion Inc. will continue to operate independently in order to “(maintain) the integrity of the brand and editorial voice,” according to Univision’s statement, Univision will have oversight of Onion Inc. to leverage Univision Digital’s distribution resources as well as its media expertise to increase exposure of The Onion brand, particularly among Univision’s core audience of Latin American millennials. The specifics of the arrangement, including why Univision will attain these controls despite only being a minority investor, were not made clear.

It’s widely known that the demographic is hungry for content. A recent study by IMS Group and comScore showed that Latin Americans are driving unprecedented growth in digital content consumption. Countries in the Latin American region are home to an estimated 119 million digital video viewers (over the age of 15 years), each one spending, on average, about 13 hours a week streaming content — more than twice the hours spent watching traditional television.

Univision has also vowed to work with Onion Inc.’s brands to explore new digital content opportunities for long and short-form video content across digital and linear mediums, though no digital mediums were specified.

Isaac Lee, chief news and digital officer at Univision, said in a statement that the role comedy plays in engaging young audience is vital to the organization. “Comedy is playing an expanding role in our culture as a vehicle for audiences to explore, debate and understand the important ideas of our time.”

Comedy and satire have become increasingly popular sources for political news among young people searching for alternatives to traditional news sources. Clips from The Daily Show, as well as similar shows such as Last Week Tonight with John Oliver and The Colbert Report have become immensely popular for sharing on social media (the official YouTube page for Last Week Tonight has 2.6 million subscribers). Former Daily Show host Jon Stewart earned the nickname “The most trusted man in America” in 2009 following an online poll by Time Magazine.

Lee added through its partnership with Onion Inc., Univision hopes to create a large slate of Spanish and English satirical content throughout the 2016 presidential election. “We are expanding our role as a go-to source for digitally connected, diverse audiences.”