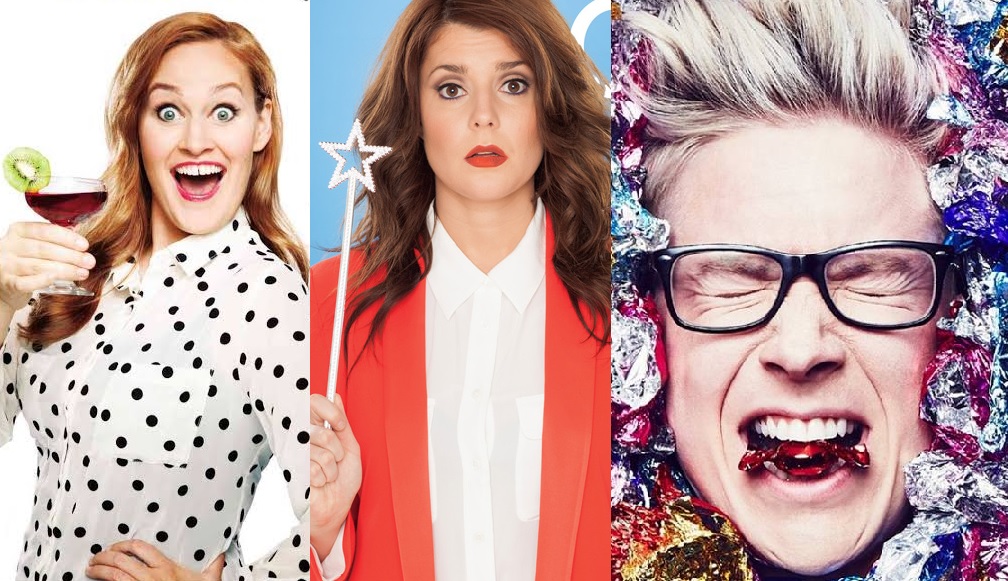 Booking it: Why so many YouTubers are becoming authors

Print and e-books are becoming increasingly popular vehicles for online influencers to make a name for themselves and broaden their audience reach.

It’s no secret that many YouTubers are keen to cross over into new platforms. Some host late-night talk shows. Some star in movies and linear television.

Over the past year, a growing number of digital stars — from mega-gamer PewDiePie to lifestyle maven Mamrie Hart  and teen-favorite vlogger Tyler Oakley — are also now picking up the pen (or, rather, heading to a computer keyboard to type) and authoring a host of commercially successful print and e-books as they look to diversify their portfolios and prove they’re not just a flash in the digital pan.

What makes writing so special in this digital age? Yes, there is the possibility of making money. But the move to such a traditional medium is more about broadening one’s reach outside of YouTube and the digital world and, hopefully, opening new career options along the way.

“It adds a really great credential… to say that you’re a published author,” said Alec Shankman, who, as head of alternative programming and digital media at Abrams Artists Agency in L.A., works with a variety of digital influencers on projects, including film, TV and book titles.

In the last year, a number of popular influencers released books across all genres. Vloggers Shane Dawson and Tyler Oakley both released collections of essays, respectively titled I Hate Myselfie and Binge. Comedian and alcohol enthusiast Mamrie Hart released You Deserve a Drink, a semi-autobiographical comedy book focusing largely on her intoxicated exploits. Beauty guru Michelle Phan lent her artistic talents to a digital comic book, The Enchantress. Colleen Ballinger released a parody self-help book told from the perspective of her tone-deaf alter-ego, Miranda Sings. Minecraft vlogger Mitch Hughes co-authored a book based on the game.

Perhaps the biggest splash of all in the literary world was made by Felix Kjellberg, better known as PewDiePie, whose collection of positive thoughts and sayings titled This Book Loves You became a New York Times bestseller the week following its release (Oct. 20).

Penning a book is becoming such a popular practice among digital stars that one publishing house has launched an entire arm just for these new authors.

Simon & Schuster’s Atria division launched Keywords Press in 2014 to work specifically with digital influencers. Jhanteigh Kupihea, a senior editor at Keywords Press and Atria, said much of Keywords Press’s business efforts are concentrated on teaching the young writers about the book business, finding a topic that works for them and, most importantly, putting out their books fast to feed a hungry and engaged audience — because the digital world tends to move a lot faster than traditional forms of media.

“Ideally, you want nine to 15 months to put out a book, from the first manuscript to when it hits the shelves,” said Kupihea. “In the digital influencer world, you just don’t have that long.” She said most books end up being produced in less than one year.

Kupihea said influencers are usually interested in topics that further their own personal brand.

“They want the book to be cohesive with their image,” said Kupihea. “You have to create a book that feels true to them. For example, Connor Franta is really passionate about imaging and photography, so that’s what we stuck to with him.”

Franta’s memoir, A Work in Progress, details his life growing up in the Midwest and his journey to internet fame, with a large section devoted to Franta’s own photography.

She said that sort of philosophy works to drive books sales among Gen Z fans as well.

“Most of these young fans care a lot about passion,” she said. “If the author cares, they care.”

Kupihea said writing a book is just another way for digital stars to expand their professional footprint and branch out into a more traditional form of media, such as Grace Helbig’s late night talk show on E! and Epic Meal Time’s participation in the CBC’s Jumping Screens program.

“It’s just a more permanent aspect of their career,” she said.

But Steve Ross, head of the books division at Abrams, said books are distinguished from projects such as TV pilots and movies because they’re fairly familiar territory for influencers.

“The common ground between books and YouTube is the direct communication with their audiences in their own unique voices,” he said.

Citing Oakley as an example, Ross said a book allows the YouTubers to express more long-winded and far deeper thoughts without being confined to a short video.

“While his YouTube channel gives him a chance to showcase his personality and his wit, a book allows you to be more thoughtful, to express what you have to say in a way that reflects a lifetime of cumulative experience,” said Ross.

Publishing houses love being able to attach themselves to established YouTube personalities, not just for the size of their fan base, but also for the target age demographic.

“These books generate a lot of press, a lot of media attention,” said Ross. “(YouTubers) are their own PR person. They’re promoting the books on their own channels on social media, and that drives people to the store. And it’s interesting because when e-books first exploded onto the scene, everyone predicted that young people would be reading books on screens. But they actually love print books, far more than the older demos. So when someone who is relevant and important to them puts out a book, they come out in droves.”

Alec Shankman added there is a degree of legitimacy to publishing a book helps bridge digital stars into the more traditional world — because in the big picture of things, he said, many online influencers are still relatively unknown.

Even Kjellberg, with his impressive YouTube salary, would barely register among Hollywood’s most powerful performers. Though his $12 million payout for 2015 left him untouchable among YouTubers, he was out-earned by 42 Hollywood actors, including Guardians of the Galaxy star Chris Pratt, This is the End star Jonah Hill and Hunger Games lead Jennifer Lawrence.

“If you compare someone like PewDiePie to someone like Kim Kardashian, that gives you an idea of where people stand in the pop culture zeitgeist,” Shankman told StreamDaily. Kardashian’s reality show, Keeping Up With the Kardashians, averaged 3.3 million viewers per episode in its most recent season, while Kjellberg has more than 40 million subscribers on his YouTube channel. “From a pop culture and press standpoint, Kim Kardashian is one of the most famous people in the world, and that’s at less than 10% of the audience of PewDiePie.”

By edging his way into traditional media, said Shankman, Kjellberg stands a chance at the kind of relevance outside of the YouTube world.

“He’s the Brad Pitt of his domain,” Shankman said (coincidentally, Kjellberg made just $4 million shy of Pitt’s earnings in 2015). “But he’s not on TMZ. He’s not on Access Hollywood. Hopefully through things like a book deal, he can leverage his fame in one area and then come to dominate another.”