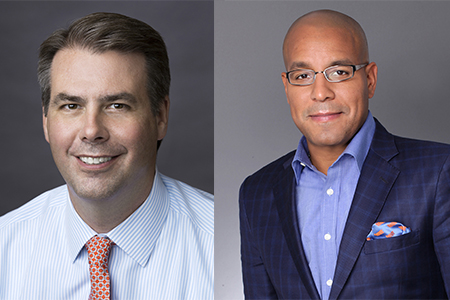 A+E Networks has upped two longtime execs and created new positions in the process as it looks to expand its digital expertise.

The moves are effective Jan. 1, 2016. Suratt will report to chief financial officer David Granville-Smith, while Cohan will continue to report to A+E president and CEO Nancy Dubuc.

“Over the next five years, our growth will come from international and digital expansion, as well as revenue diversification. By appointing Dan and Sean to these new roles and aligning our businesses and goals, A+E Networks is well positioned for future success,” said Dubuc in a statement.

Suratt was part of the team that completed A+E’s investments in Vice, Epic Magazine and Samba, and under his leadership the corporate development team will continue to assess investment opportunities and set the company’s overall investment strategy.

Cohan, meanwhile, will assume added responsibility for all strategic, operational, editorial and distribution functions around digital media globally, while also continuing to oversee all of A+E’s international brands, services and staff outside of the U.S.

In related news, A+E Networks has bought a stake in cooking app Panna and is partnering with the brand to produced content for cable net FYI.

FYI and Panna kicked off the partnership with 12 Hacks of Christmas, a series of 45-second interstitials that will air during primetime through December 24. The segments include holiday recipes from chefs such as Seamus Mullen, Michael Anthony, Michael Tusk, and the Canal House.

The channel is also developing new content with Panna.

Story courtesy of Realscreen, with files from Kevin Ritchie