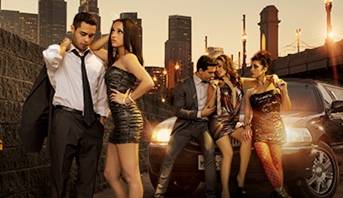 The teen drama, co-produced by the SVOD service since its second season, targets the influential millennial Latino demographic.

Hulu original East Los High, which first bowed on the SVOD in 2013, will come back for the fourth season.

East Los High, which follows a group of troubled high school students at an inner-city Latino high school in L.A., will return in 2016 with 12 new episodes.

The series is co-produced by Hulu and Wise Entertainment and was created by Carlos Portugal and Kathleen Bedoya. The show is noted for having an all-Latino cast, creators and writers. The show was nominated for two Daytime Emmy awards in spring 2015, both for outstanding performer in a new approaches drama series (actors Vannessa Vasquez and Danielle Vega).

When East Los High began, it was financed entirely by non-profit groups such as Planned Parenthood. Hulu stepped in as co-producers in the second season. The show is primarily targeted at Latino teens and millennials, though its content is primarily in English.

The Latino millennial demographic has no shortage of appetite for content and is one that numerous MCNs and media companies are attempting to attract right now. MCN Fav, OTT service Sling and media company Mitu are just some of the businesses looking to tap into the demo. Earlier in 2015, Hulu also paired with the OTT service Flama to create five web series targeting the Latino demographic.

Hulu has spent much of 2015 adding and expanding on it slate of originals, premiering (and renewing) comedies such as Difficult People, Casual and its digital season of the former Fox comedy The Mindy Project. In March, it will debut the drama The Path featuring linear stars Aaron Paul (Breaking Bad) and Hugh Dancy (Hannibal).

The SVOD also recently landed among the Golden Globe nominees for the first time. Its comedy Casual received a nomination for best musical or comedy series, one of three digital originals in the category.