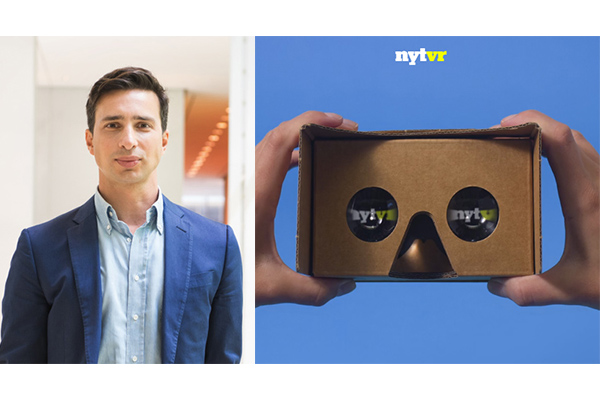 A month after the official launch of NYT VR, associate editor Sam Dolnick talks about the outlet's plans for news-oriented virtual reality.

On Nov. 8, around one million Google Cardboard viewers arrived with The New York Times’ Sunday edition on doorsteps across America.

“This piece of cardboard will take you halfway around the world,” read the bright blue bag containing the newspaper and accompanying DIY virtual reality viewer. All a Times subscriber had to do was read and fold according to the instructions, pop their smartphone in the back, access the free NYT VR app and — perhaps crucially — keep an open mind.

The conversation around NYT VR — the Gray Lady’s first dedicated VR unit — had begun in February as a germ of an idea to see if the burgeoning medium could be worthwhile from a journalistic vantage point. After all, with the four-year-old ‘Op-Docs’ arm, which commissions and acquires documentary shorts (critically acclaimed Notes on Blindness and A Short History of the Highrise among them), and an extensive team of video-journalists within the newsroom, the outlet has undertaken great effort to go beyond what’s expected of a legacy brand.

Sam Dolnick (pictured, left) had been working as a reporter and editor at The Times since 2009 before boarding the VR project earlier this year. He came to the team with a “straight, traditional perspective” compared to colleagues more experienced in filmmaking, but he told realscreen, StreamDaily‘s sister publication, he’s always looked for new ways to tell stories, and VR seemed to fit the bill.

In April, the team released a proof-of-concept video titled Walking in New York. It wasn’t officially announced, but there were a few screenings to test its appeal among small audiences. The film’s success encouraged the unit to delve further into the technology, and after teaming with VR content studio Vrse.works, The Times officially launched NYT VR with The Displaced, a 12-minute film profiling child refugees in Lebanon, South Sudan and Ukraine. Almost two weeks later came Vigils in Paris, a quick-turnaround VR experience of candlelight vigils in the French capital following the Nov. 13 terrorist attacks.

“The big challenge for everybody working in VR is how do you get people to watch the stuff?” said Dolnick. “Not many people have the headsets, and these are big files that are hard to load. Our big Nov. 8 launch, we were really nervous. Were people going to bother to take out the cardboard, are they going to download the app, are they going to go through all the steps?”

As it turns out, Times readers had a taste for Cardboard, and NYT VR was the outlet’s most successful app launch ever. Now, with another film – this one a Hollywood-oriented effort connected to The New York Times Magazine– rolling out today and acquisitions in the near future, Dolnick said The Times is looking to become a leader in the VR world.

What can we expect from this next VR film from The Times?

Every year the magazine does the ‘Great Performers’ issue, which celebrates the best Hollywood performances, so this year we are making a series of short films with the group of Hollywood actors we’ve decided to focus on. In addition to the suite of films, we’re making a VR film that will feature a number of these actors.

What stories are best suited for NYT VR?

The Times contains multitudes. NYT VR will have just as wide-ranging and eclectic a mix as The New York Times itself. Just from our films, the refugee crisis is perhaps the biggest story of our time. It’s a signature New York Times story about a humanitarian crisis, and our second big film is The Great Performers: The Hollywood Issue which is a cultural story, a delightful story, and it’s going to be different in tone and look in every way. I think you’ll see NYT VR running the gamut from serious to light, and from work produced by name-brand New York Times journalists to creative outside filmmakers you’ve never heard of.

How many filmmakers do you have working on NYT VR?

We’ve got a number of talented video-journalists and photographers. We’re getting a lot of these visual journalists trained in VR so that we’ll have a group of people who are able to operate at different speeds – who can shoot a traditional video, who can take pictures, who can shoot VR. We may have some of them specialize in VR as we get further, but we’re still in the process of getting a number of people trained before we figure out who exactly will be the experts.

For something like Vigils in Paris, how many people worked on that?

Ben C. Solomon and Leslye Davis were the journalists on the ground who worked on that in Paris, and then we had a team of maybe three or four editors in New York who edited it and put it together.

How many films are you hoping to make? Is there any kind of publishing schedule?

We don’t have a steady rhythm yet, though we want to be doing a lot of these in 2016. Whether that turns out to be monthly, every two weeks or more sporadically in part will be determined by the news. The Paris visuals video wasn’t something we planned but the news called for it. We’ll be doing bigger projects like The Displaced as well.

Some people who got the Cardboard viewer from The Times – and this seems to be an ongoing issue for VR – are saying they’re getting nauseous or sick when watching the films. What are you doing to address this?

We were prepared for that to be a major response but it wasn’t; it was a tiny fraction of people. During the release of The Displaced, it was a social phenomenon – everybody on social media was sharing photos of using their Cardboards and watching the film and that just wasn’t the issue. I’ve seen a bunch of VR films and there are some that can make you feel sick and queasy, but so far we haven’t heard from viewers that ours have done so.

Are you looking to acquire films or build a stable of filmmakers from outside The Times at all?

Yeah, we will be looking to host films. [With Op-Docs], we have a pretty strong tradition now of hosting films that outside filmmakers make and bringing them to our audience and offering them a way to connect with viewers. So we’re looking to do similar work in VR, where we can offer a way for VR filmmakers to connect with a giant audience.

Will you partner with ‘Op-Docs’ for projects between the two divisions?

I don’t know if it’s quite right to describe it as a partnership between ‘Op-Docs’ and VR. It’s more NYT VR will include films made outside The Times and [Kathleen Lingo of ‘Op-Docs’] has excellent taste and excellent connections and she will be crucial in helping select those and guiding us through that.

There are some ethical concerns around VR and the staging you need to maneuver to make the films appear seamless. Are steps being taken to be transparent with audiences?

Transparency is absolutely crucial. There’s no playbook, no guidebook, no stylebook for VR. We are at the forefront of this along with lots of other people, and I think the way forward is for us all to be as transparent as possible about how we make these films and what the limitations are and what the advantages are, and to be transparent with our audience, too. The key to all journalism, I think, is that the audience doesn’t feel tricked, that they understand what they’re reading or viewing and how the journalist got that info so that the audience can decide for themselves how much to trust it. That trust is the backbone to The New York Times’ relationship with its audience around the world and it’s absolutely crucial we maintain that in VR.

Do you have any advice for others looking to enter into the VR space?

The key is to experiment. This is an incredibly exciting moment, it’s not often when there’s a brand new field that opens up with no rules, no precedents. Anybody working in the space is helping to shape it, and that’s really unusual and exciting, so I would encourage anyone to just experiment with this and try telling stories in new ways.

And paired with that is the second piece: transparency. To really be open with how you make these work. What works? What does work? What are you comfortable with, what are you not comfortable with? There are all kinds of issues that working in VR raises and I think we’ll all be better if we’re grappling with those head on.

This interview has been edited and condensed.