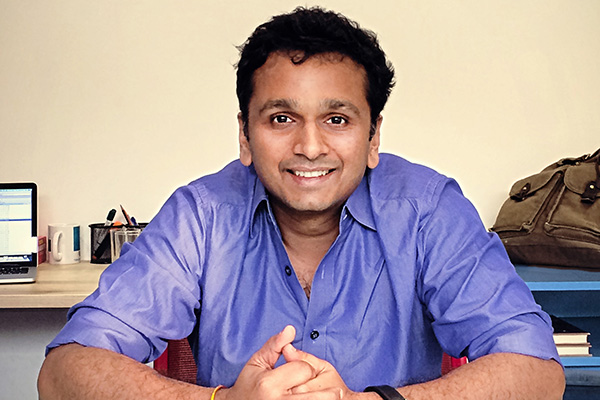 Sai Kumar, CEO and founder of Arre, promises a home to "any idea that resonates with 'Gen Now' and is top-of-mind for them."

Ronnie Screwvala (pictured, below) has been at the forefront of India’s media renaissance for more than 30 years, having first launched his Mumbai-based prodco Network in 1981, and founding the media and entertainment conglomerate UTV Group in 1990.

Over the course of 20 years, Screwvala would expand the fledgling UTV into broadcasting, gaming and film before exiting the company he founded a year after the February 2012 acquisition by the Walt Disney Company’s Indian division.

Since his departure, the entrepreneurial television exec has been preparing the launch of digital media venture, UDigital. Working alongside former Network18 COO Ajay Chacko and group CEO B. Sai Kumar (pictured, above) – who led Network18 from single channel net to $1 billion-plus media conglomerate – UDigital has since poured an estimated $23 million into its ad-supported digital platform, Arré, which is slated to launch in separate phases beginning in January.

The term “arré” is an Indian colloquialism that roughly translates to “whoa” in English, and is used in myriad contexts. The comprehensive expression is fully reflective of the content the multi-format and multi-genre digital platform expects to offer, from text-driven narratives and podcasts to scripted series and documentary.

Arré’s introductory factual project – and India’s first-ever digital reality series – is the social experiment series Re-Gender from Israeli producer-distributor Armoza Formats, in which six participants are given the chance to experience life as a member of the opposite sex. “Original premium content is relatively new in India,” Kumar, MD and co-founder of UDigital, told Realscreen, StreamDaily‘s sister publication. “We believe [Re-Gender] is a brave yet relevant [concept] in the current cultural context of the country. India today is a society in transition. Traditionally defined gender roles are being challenged and we hope to engage the youth in a close look at the challenges of the opposite sex and thereby find empathy and equality in their relationships.”

Though the fundamentals of the format will remain unaltered, the Indian adaptation will be tailored to the local environment in language, theme and tone. Arré has also extended the series run to 20 episodes (as opposed to the format’s typical order of seven) in an attempt to engage viewers in the “complex relationships” of Re-Gender’s individual participants.

Elsewhere, Arré is also putting its weight behind original, India-set investigative documentaries with a global audience in mind.

Bolstered by a strategic partnership with English-language Indian daily newspaper The Indian Express, the films will explore a broad range of subject matter, from human interest stories and geopolitics to socio-cultural issues and crime.

“We wish to create content that is layered and contextual – any idea that resonates with ‘Gen Now’ and is top-of-mind for them on a passive or active basis will find a place at Arré,” said Kumar explains. The German version of Re-Gender from Israeli producer-distributor Armoza Formats.

With a core 18- to 30-year-old demographic, the digital venture plans to deliver approximately 15 to 20 series per year while staying committed to “genre and format neutral projects,” according to Kumar.

Arré will choose format lengths that best align with each individual project, meaning that seasons and run times will vary across the board. Kumar anticipates content will range anywhere from seven to 100 episodes and run eight to 20 minutes, or beyond.

Once the company surpasses a certain critical mass within the Indian sub-continent, Arré will roll out phase two by diving head-first into global market expansion and escalating the distribution of its slate into Asia, Africa and the U.S.

Kumar said the platform will initially be made available to desktop and mobile users via a website and native apps before opening up via partnerships and alliances to a host of social media and distribution platforms, such as Facebook and YouTube, and potentially becoming a subscription-based property.

“This will initially be an advertising-supported platform and the next steps on revenue lines, especially subscriptions, would be a factor of our popularity, engagement and the continued growth of digital wallets and payment mechanisms,” he said.