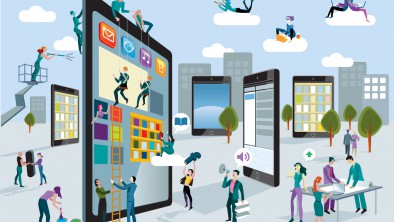 How digital is breaking down barriers, getting producers closer than ever to the action.

How digital is breaking down barriers

Can a channel dedicated to horses really work? How about a show dedicated to fans of fantasy fashion? Lovers of yellow high heels?

Yes, the move from linear to online has presented a number of new challenges for producers: The shift away from broadcasters has resulted in more onus on the creators to think about promotion and discoverability; budgets are smaller and the need to capture attention more quickly is greater.

But, the sheer power of digital can’t be ignored.

YouTube receives more than a billion visits each month, with audiences watching more than six billion hours of video, according to a report by the Canadian Media Production Association and the Canada Media Fund. Cisco, the report found, believes more than three quarters of all internet traffic in 2018 will come from video.

By sheer volume alone — it’s safe to say there’s an audience for anything – that includes niche channels, even those dedicated to yellow pumps.

Indeed, the internet has created a world in which boundaries are broken down, and everyone can find a community online.

But, most importantly, digital seems to be breaking down barriers between producers, content and their audience. This opens up a new way of telling stories, bringing viewers into the fold and allowing creators to connect with unique groups of people looking to be entertained.

“Today, creators have a relationship with their audience,” says Sam Toles, Vimeo’s head of global content, who will be speaking at the upcoming Prime Time conference in February. “In the linear world, you have an idea, pitch the idea, make a pilot (and) it might get picked up (or) it might not.”

Online, however, producers can go directly to their viewers to pitch story ideas.

He points to the upcoming puppet series Oscar’s Hotel for Fantastical Creatures as a prime example. Created by YouTuber PJ Liguori, the series dropped on Vimeo On Demand on Sept. 15. While creating the series, Liguori tapped his 770,000-plus YouTube subscribers (and 360,000-plus Twitter followers) for advice on how to write or film certain sequences. As a result, his fan base was highly engaged in the process, and was eager to pay for it through Vimeo’s VOD platform because they felt a pride of ownership around the series.

Tapping into that audience love has extra, financial benefits, says Jay Bennett, ‎SVP of creative and innovation for Shaftesbury/Smokebomb. Niche communities can be especially fervent in their adoration of content. They’ll create fan art, fan fiction, and discuss shows ad nauseum. And they’ll also be a series’ biggest fans, which is a great opportunity to bring brands on board.

Digital natives aren’t looking for brands to tell them to buy a specific product, they’re looking for reasons to want to buy a product, says Bennett.

He points to Carmilla, created for feminine hygiene brand Kotex. (Vampires and blood, the connection makes sense). The two-season series was fully funded by the brand, which has pulled in more than 15 million views across 72 under-10-minute videos, all through organic, word of mouth.

“We as producers have never done a great job thinking about brands (and our content),” he says. “But that’s changing.”

Bennett cautions, however, that creating content online means having a laser-focus on the intended audience. It’s not just enough to know the audience, but producers also need to know where they are, what they’re doing, how they’re watching and why they love what they love.

“As you get on smaller screens, you need to get more specific for whom you’re making content for,” he says. “You have to be precise. It’s not just talking to women who love fashion. It’s a matter of talking to fashion graduates who love high heels.”

That’s what producer Mackenzie Donaldson is doing with her upcoming scripted series, Did. After receiving critical praise for her period dramedy Whatever, Linda (which looked at the women behind a Ponzi scheme), this time, she’s partnering with Shaftesbury/Smokebomb to create a new series set in a nail art salon.

The story revolves around an up-and-coming artist who gets sucked into an “underground crime ring” fronted by this salon. It’s a show for women, who love nail art (not just nail polish) and mystery.

“When we wrote Whatever, Linda we definitely approached it from a narrative, serialized, film perspective. We were trying to write a TV show in a digital body,” she says.

And, as good as the story was, she says the final view count wasn’t nearly as high as she thinks it could have been – and that was partially because they didn’t put enough focus on putting it front of the right eyeballs.

For Did, a lot more focus is on finding the right couple hundred people who will see the show first, and then grow out the audience from there.

“This relationship with fans is changing the very nature of storytelling and content creation”, says Reynolds Mastin, president and CEO, CMPA. “We’re using Prime Time as an opportunity to brainstorm with the best minds in the business about how to collaborate with audiences from the beginning, how that changes the stories we tell, and what new doors this opens for the global impact of Canadian content.”

Catch Toles, Bennett and Donaldson on the ‘Innovations in Storytelling’ panel at the upcoming Prime Time conference, happening this Feb. 3-5 in Ottawa.  www.primetimeinottawa.ca