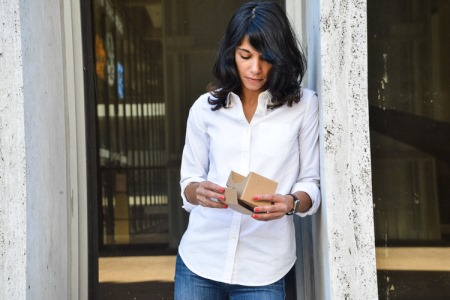 Jessica Brillhart, Google’s principal filmmaker for virtual reality, had a simple message for delegates attending the IDFA’s DocLab Interactive Conference on Nov. 22: keep an open mind about the burgeoning medium.

The director – who worked with Google’s Creative Lab from 2009 until joining the VR division earlier this year – recently completed the VR film World Tour for Google Jump, a virtual-reality platform that assembles footage into stereoscopic VR video, and lets users experience a scene in all directions. Revealed during the Google I/O conference in May, the platform’s three components include camera geometry, an assembler and player.

The geometry – a blueprint of sorts – has so far been applied to GoPro’s Odyssey rig, which features 16 GoPro cameras placed in a circle. Footage from the 16 camera feeds is stitched together using an Assembler device, and can ultimately be hosted on the Google-owned YouTube platform. World Tour is the platform’s first film, and found Brillhart and producer Nick Kadner travelling to Puerto Rico, Iceland and Japan to capture a series of experiences showcasing the technology’s capabilities. The project premiered earlier this month at AFI Fest’s ‘State of the Art’ VR showcase. Brillhart (pictured), who is attending the Amsterdam-set IDFA for the first time, admits there is still a lot that is unclear about VR and its parameters for storytelling, particularly in the documentary space. What she hopes, however, is that doc makers won’t jump to conclusions without first getting some kind of practical experience and understanding of how the technology works.

“The medium is something that needs to reveal itself, and the worst thing we can do is make assumptions about it and not experiment and explore it in a way that would really allow it to reveal what it needs to,” Brillhart told Realscreen, StreamDaily‘s sister publication,after the presentation.

“It’s more of a plea for people to be a bit more open-minded with the format. Right now, there’s too many presumptions and assumptions that may be preventing [VR] from really affecting us the way that it can.”

When did you join Google?

I joined Google in 2009, and started with a team called the Creative Lab. I was their first filmmaker, which was a very interesting concept at the time because ‘filmmaker’ wasn’t really a title you had at Google. I was there until this year. Then, a group of engineers reached out to me and said they built this 360 stereoscopic camera rig. I didn’t really know what that meant. I knew what VR was, but I was a little skeptical myself. At the time, I knew Chris Milk, and I knew he’d done something with it, so it was like, ‘Oh it’s that thing Chris did that one time; maybe it’s something interesting.’

I went to visit these engineers and I saw what they had filmed with it and I understood immediately it was something special. It was in rough stages, but they were really insistent. They said, ‘We really want to release this, we think it could be amazing,’ and I asked, ‘What do you want me to do?’ They said, ‘Make something.’ I went around the world and filmed with [the Odyssey] in specific spots we could get to that would show a range of experiences. It was a pretty incredible trip. Me and my producer Nick Kadner went out to Japan, Iceland and Puerto Rico and braved a prototype camera and terminal commands – and remote engineer support because they had to help us out when things went wrong –  to come back with footage that we then had to put together into the film called World Tour. It’s been the content for what [Jump] can do.

It was my first VR project. I learned a considerable amount. You start building it out in your head as you film, because at the time there’s no viewfinder – you can’t see what you’re filming. So all you can really do is trust in your experiences. Then you start to actually wonder: the more locations you go to, you actually stand in a place and you look around and you start to understand if it’s going to work or not. It’s an intense feeling because you also, in a lot of ways, don’t know if you’re right. I can’t see this experience in a headset; I don’t know what’s happening right now, or if that’s going to resonate.

Over time, I felt I started to learn what would resonate the most, and editing was another part of that process. The more I started working through it, I realized all of it is very mental and involves our brains and minds in a really fundamental level.

How big is your team?

The team is pretty small. It’s Kadner, me, team lead Todd Shaiman from Pixar, and Tarik Abdel-Gawad, a VFX filmmaker who comes from a company called Bot & Dolly. Is Jump reaching out to certain filmmakers at IDFA?

VR’s in this bizarre state right now. I want to constantly be out there [saying], ‘I’ve seen a lot of stuff and it’s still really unclear what this medium is, and don’t let anyone say or tell you what it is.’ There are things that seem to be true – we still haven’t really tested those out yet – but the more I can help inform some sort of platform, we at least have a good jumping-off point instead of people making the same mistakes over and over again, and the format goes nowhere. And included in that is reaching out to filmmakers that would be really good in this space – people making stuff here as well – and a lot of us are coming up with very similar opinions on this, which is a really good sign.

Are you hoping to bring on a team of filmmakers then?

We’re not sure yet. We’re trying to see what happens with the space. Obviously it would be great to bring on more filmmakers. I think, dominantly, a lot of it is reaching out to other filmmakers working in this space to then see what they want to create. The great part is that a lot of these pretty established filmmakers just want to shadow. It’s like, ‘Sure, great, come along.’ And we work together. They can be on a shoot with me and see what’s actually going on, because a lot of it is actually getting the practical experience and then being able to film with it and see what you’ve done.

What do you say to those doc makers who wonder why they need VR to tell their stories instead of using other formats that are probably much cheaper to access?

I think it’s going to get cheaper and cheaper. When cameras were first announced and shown, they weren’t cheap either. They had to get to rental houses and schools and universities, and then the tech started being more available, people started making smaller versions of them.

The frame we’ve been experiencing is a great window of seeing stuff and it’s a huge part of cinema – the only part of cinema so far until VR came along – but it’s pretty contained, and there’s a medium now that involves the entirety of being somewhere, not just a specific piece of it. Errol Morris today [Sunday] did a dialog where he immediately said, ‘I think VR is about context,’ so it’s good we’re on the same page. For a doc filmmaker, context is huge, and if what you’re making a doc about needs context, and will be able to be communicated better with context, [VR] is a beautiful format for that.

What genres of content lend themselves best to VR?

It’s really important that we really understand how it works on this basic, most fundamental level before we get too complicated too fast. Everyone’s like, ‘Let’s just make it, all the possibilities are there!’ And it’s like, ‘That’s great but let’s take a moment to think about what this is now.’ I do think it could be purely experiential. There are a lot of pieces out there that do that, where you’re in a spot and you can just be there. It’s just one scene, that’s the whole experience. Or it’s a series of scenes that either fade in or fade out, or scenes that play up more to psychological tendencies and edit based upon that. I think that’s just the beginning of things we can be doing with it.

When will the Odyssey be available to the general public?

Do you have anything to add about your experience so far at IDFA?

I think pretty deeply about this stuff and there are different sub-sects of creators. Some are more oriented towards the gear, some are geared towards commercializing the content. And although I’m paying attention to all of that, my heart and soul is in philosophizing and trying to figure out the grammar and language for this. People see Google and they see a big company, but I believe us to be artists and we’re all really excited about what’s going on here. It’s good for us to not be hiding away and be making stuff.