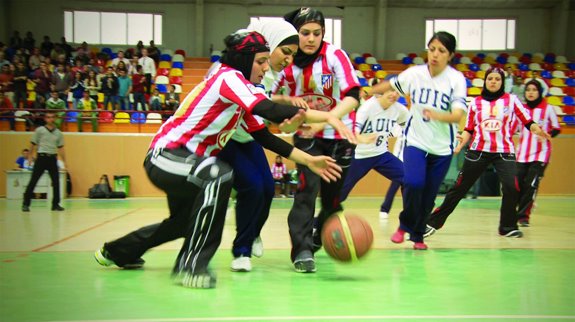 CNE will stream the doc, which follows an Iranian university's first-ever women's basketball team, on its Teen Vogue branded channel.

Salaam Dunk, a 2010 documentary on the first-ever female basketball team at the American University in Northern Iraq, has a new digital home.

Conde Nast Entertainment (CNE), via its media brand Teen Vogue, has acquired the film and, after giving it a modern make-over (including splitting it up into four distinct chapters), has made it available for free for the first time. As of Nov. 2, all four chapters can be found at TeenVogue.com and on the CNE’s video platform, The Scene. Previously, the film has been available for purchase through iTunes, and was also sold in DVD form. The film aired at several festivals in 2010 and had a limited theatrical run.

CNE first announced the acquisition of the documentary at the NewFronts in April.

In order to repackage the documentary from its initial theatrical release five years ago, CNE enlisted the help of singer/actor Zendaya Coleman, who delivers introductions and epilogues for each of the four videos that make up the documentary. The new version also contains updates to where the basketball players featured in the film are now and how their lives have changed — particularly since the infiltration of the Islamic State right-wing militant group, commonly known as ISIS, into the region since initial filming was completed.

Michael Klein, EVP, programming and content strategy, digital channels at CNE said in an email to StreamDaily that the recent events in Iraq and Syria have made the documentary’s initial storyline more relevant than ever.

“We felt the story of the Iraqi college basketball team was powerful and really captured progress on women’s rights in Iraq,” said Klein. “With the recent setbacks in the region, we knew the story would resonate more than ever with our audience.”

In unrelated news, CNE announced Nov. 3 that it has appointed former Spotify and Google research and analytics lead Tatiana Gonzalez Rama to lead its video data and growth. Gonzalez Rama will specifically work with The Scene, spearheading initiatives to analyze and grow its audience.

The Scene launched in 2013 to serve as a digital home for CNE’s original videos. CNE has produced more than 4,000 videos across The Scene’s 40 branded channels, which include Allure, Glamour, Wired and GQ. According to CNE, the service has seen more than 2.7 billion annual views.