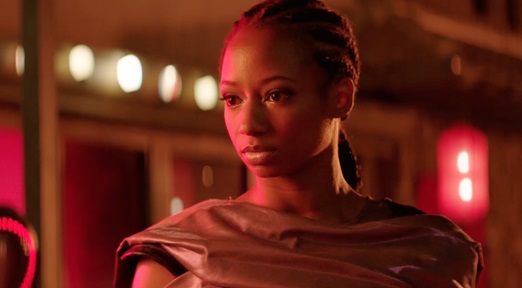 The Fourth Door stars Monique Coleman and Jarrett Sleeper talk with StreamDaily about the new sci-fi series, which bowed Oct. 27 on Go90.

Monique Coleman is known for her past work in the  High School Musical franchise and her online talk show Gimme Mo. But the actor told StreamDaily she’s never done anything quite liker her lead role in The Fourth Door, the new teen sci-fi Go90 series which bowed Oct. 27 on Go90.

Perhaps the most unique thing, she said, was creating content to be consumed in smaller clips on mobile.

“It really feels like content that’s been sliced up and packaged because this is the generation that bounces around a lot,” Coleman said. “That’s the consumption mindset for this generation — you can watch a little bit here, a little bit there.”

In The Fourth Door, one of six new projects from New Form Digital commissioned for Verizon’s Go90, Coleman stars as Lain, who wakes up in limbo with no memory of how she got there or who she is. Throughout the series, Lain has to fight off various monsters and supernatural beings that she soon realizes represent her own fears and internal conflicts.

Coleman and Sleeper both spoke to StreamDaily about the project and what it was like working on a short-form digital series created for specifically for mobile consumption.

With each of the 12 episodes clocking in at just under nine minutes, Coleman said the short episodes are each specifically designed to draw viewers in the story and the characters.

“It allows for more imagination, the viewers get excited about it like ‘Oh, I can’t wait to see what’s going to happen in the next episode,'” she said.

As a project writer and co-creator, Sleeper said the idea was to create a serial vibe that carried viewers through all 12 episodes of the show.

“We didn’t want to do a ‘monster of the week’ kind of concept,” he said.

At the same time, the writers didn’t want the show to just feel like a big piece of content split up into chunks.

The result? “We kind of met in the middle — there’s a lot of cliffhangers and overarching themes that tie the episodes together, but each one still feels unique,” said Sleeper.

Sleeper added teen consumers are used to more personal, vlog-like experiences, so he and Valenzuela worked to incorporate that feeling into how they arranged shots.

“You’ll see a lot more of faces filling the frame, close-up and mid shots than you would in movies and television,” he said.

Sleeper has previously appeared in the Fine Bros. digital series MyMusic — but this series marked his first time combining his talents as actor and creator.