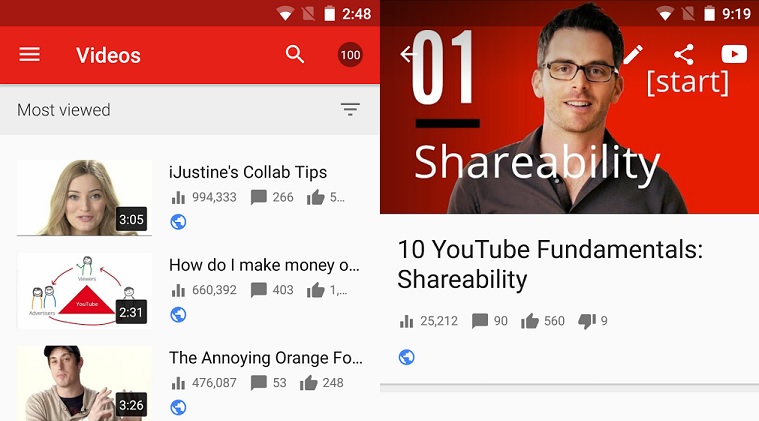 With more than half of its audience on mobile and facing competition from new platforms, the Google-owned giant is putting more focus on creators.

Following feedback from creators, YouTube has made several updates to its Creator Studio app for Android and iOS.

As of Oct. 16, the app comes with a redesigned interface and contains a broader range of creator controls and tools.

Creators now have more than 50 new metrics they can examine, giving them insight into a variety of areas, including what devices their views come from, and what the top search terms are that lead to their videos.

Creators can also choose to monetize their videos through the app (previously they have only been able to do so via desktop), and can create and edit playlists from the mobile app.

Since Susan Wojcicki, CEO of the Google-owned video giant, delivered her keynote speech at VidCon in July, YouTube has made a number of creator-friendly upgrades to its web interface and apps. Those upgrades include greater control over comments to better weed out “trolls,” and the expansion of its royalty-free music library so creators can add music to their videos without worrying about content being pulled from the web.

The decision to add more features to YouTube’s mobile app comes as the 10-year-old video platform now sees more than half of its video views from mobile devices.

Changes that target creators are also increasingly vital, as several video upstarts spring onto the scene (including Vessel, which offers creators a more lucrative 70/30 revenue split to YouTube’s 55/45), and giants such as Facebook and Verizon get into the original content game.

According to its own statistics, YouTube currently has more than one billion users.