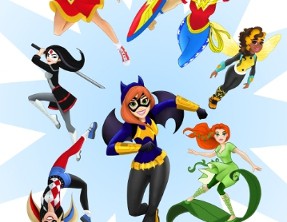 The comic company has partnered with Warner Bros., Mattel and Lego to launch a site and web series dedicated to young female comic fans.

Boys aren’t the only ones who love superheroes. American girls are also in need of complex and strong characters they can relate to, according to Warner Bros. senior exec Diane Nelson.

“Girls want to experience the strength, action and optimism of (superheroes), too,” Nelson said in a statement announcing the launch of a new superhero hub, in partnership with DC Comics, Warner Bros. Consumer Products, Mattel and Lego.

Wonder Woman, Supergirl, Batgirl and a large cast of other female superheroes (and villains) are at the heart of DCSuperHeroGirls.com. The website (first announced in April) launched in the U.S. Oct. 1, with plans for a global roll-out later in October.

The first episode of the series Welcome to Super Hero High premiered Oct. 1 and will continue with weekly episodes over the coming weeks and months. The series follows teenaged versions of Wonder Woman, Supergirl, Batgirl, Harley Quinn, Bumble Bee, Poison Ivy and Katana as they each discover propecia cost their own super powers and learn the fundamentals of being a superhero.

The launch http://viagrageneric-cost.com/ of the site coincides with the upcoming release of the DC Super Hero Girls line of action figures, which will be on display at the New York Comic Con, Oct. 8 to 11.