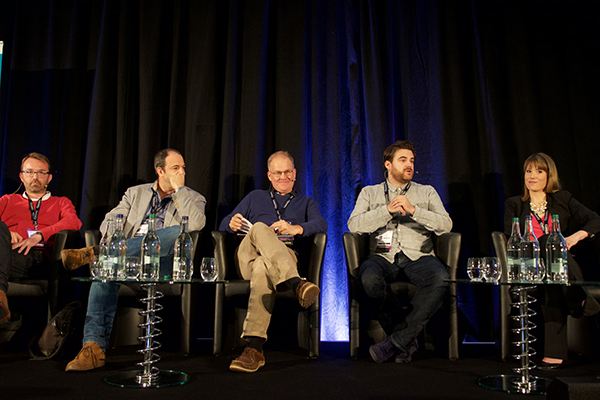 The company execs, along with those from Barcroft and CuriosityStream, joined the Realscreen London panel to discuss digital opportunities.

Hear what they had to say:

Simon Chinn, co-founder of Lightbox and the producer behind Oscar-winning docs Searching for Sugarman and Man on Wire, has made the shift online after producing two films of a six-film deal with Microsoft’s now-defunct entry into the film realm, Xbox Entertainment Studios, in the summer of 2014.

Chinn revealed to delegates that his London-based shop has now teamed with online streaming provider Netflix for a docuseries, but said further details on the project are forthcoming.

“Netflix was part of our thinking, and now we’re actually doing a documentary series for Netflix so it feels like those conversations have born exciting fruit,” he said. “But the thing [that] set the company up…was a big commission from Microsoft and Xbox Entertainment Studios.”

While only two of the six films commissioned were completed – Atari: Game Over, about the downfall of Atari, and The Thread, about the social media witch-hunt that followed the Boston bombing – the remaining four films were returned to Lightbox once the gaming company closed its doors to film. The prodco plans to release the films elsewhere.

Sam Barcroft, CEO of Barcroft Productions, told delegates that the company managed to steadily grow its YouTube audience to 1.48 million subscribers by uploading video clips from Barcroft’s footage library in an attempt to further acquire licensing opportunities. Attention to the MCN saw the channel attain more than 500 million views in 2014 to become the largest digital news channel, beating out the likes of CNN (300 million views) and Vice (200 million views).

“[MCN’s] have just got so much experience managing so many different channels that they’ll tell you exactly how to put your videos together to be the most powerful they can be,” said Barcroft. “They can help manage the relationships with those platforms, and that’s where MCN’s offer the most value in my experience.”

In May 2014, the Walt Disney Company acquired short-form video network Maker Studios, which attracts more than 11 billion views on YouTube per month, in a deal worth up to US$950 million. With more than 55,000 independent creators across the globe, the MCN focuses on developing talent, creating premium programming and expanding its brands to audiences through a direct-to-consumer distribution approach.

“The idea was that Maker could be the thing that would fill [Disney’s] millennial gap,” said Luke Hyams, Maker Studios’ head of content.

To maintain continuing success, Hyams noted that nearly all productions at the studio are completed differently, with content produced in-house, through copros, by outsourcing materials to other prodcos, or handing content to talent themselves.

“A lot of [content creators] are very capable makers of videos and sometimes the right thing comes along that the talent can handle themselves and off they go,” he said. “We like to do things in a variety of ways.”

Unscripted series and documentaries have also begun to shift to the virtual world with such SVOD services as Hulu, Amazon and Netflix inking long-form titles to exclusive deals.

CuriosityStream’s president Elizabeth Hendricks North can attest to the surge as the digital platform, which recently launched internationally, has seen a 20% subscriber growth week over week since August.

Though the service commissions, the majority of its half-hour and hour-long programming from producers and outlets that include the BBC, NHK, ZED, Terra Mater, Flame and Terranoa, CuriosityStream has also been producing original short-form series that range between eight and 20 minutes.

“What’s been really interesting is that when we first polled our subscribers to find out what was the most attractive programming length for them, they mostly answered [that they watch] over hour-long programs,” said Hendricks North. “What we’ve seen is that they’re actually watching more of our eight- to 20-minute long episodes. That’s been a delightful surprise.”