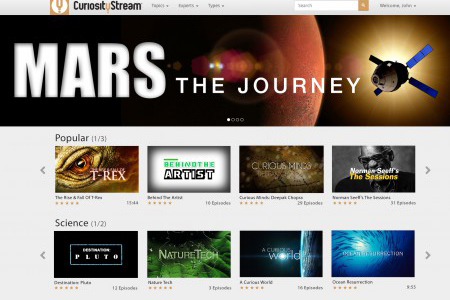 Following its U.S. launch in March, the non-fiction SVOD created by Discovery Channel founder John Hendricks is now live around the world.

Programming currently on the service includes Innovation Nation (52 x 30 minutes), hosted by Mo Rocca; French production Tales of Nature (10 x 50 minutes); the 11-part Destination Pluto; the five-part, technology-focused Next World and astronomy series Cosmic Front from Japan; and even some celeb-centric programming via Chopra: Love in Action, featuring Dr. Deepak Chopra and a host of celebrity guests, and Norman Seeff: The Sessions Project, a 60-part series featuring stars interviewed during sessions with the legendary photographer.

Access to the service will be offered at a price point starting at $3.99 per month for standard resolution content. HD content costs $6.99 per month and a 4K offering will be available in 2016.

“Unlocking all of this incredible content for worldwide viewers to easily access and enjoy is our ultimate goal,” said Elizabeth North, president of CuriosityStream, who is set to announce the service’s global expansion during a panel session at Realscreen London. “We saw an opportunity in the marketplace to offer high-quality programs that are mobile-friendly and appeal to a wide audience hungry for science, nature and history programming.”

To mark its global launch, CuriosityStream premiered four original programs Oct. 1 focused on Mars, coinciding with the release of the film The Martian. The programs include the mini-doc Mars: The Journey, the five-part series Destination Mars, the short-form doc A Curious World: Can We Colonize Mars? and the one-hour special: Cosmic Front: Terraforming Mars.