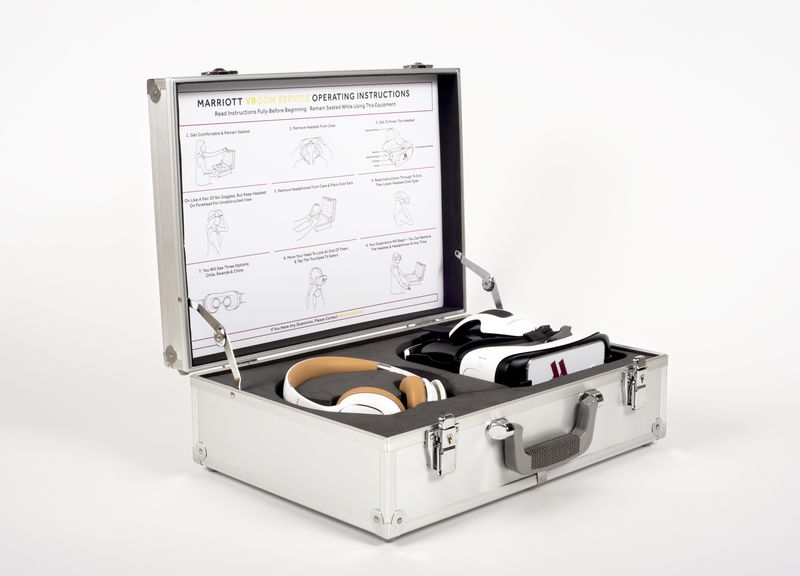 VRoom Service allows guests to order a Samsung virtual reality headset to their rooms. Plus, the hotel chain has launched a new series, VR Postcards.

Starting today, guests at Marriott’s New York Marquis or London Park Lane hotels can now order a Samsung Gear VR headset to their rooms to watch short VR films (referred to as “experiences” in the VR world) not unlike a movie, meal or bottle of wine.

Guests will have access to the headset for 24 hours and can select from a number of VR experiences available for download from the Samsung Milk VR video service. Some of those experiences include music performances from SXSW, SpikeTV’s Lip Sync Battle and NBA coverage.

They can also view any of the three experience from Marriott’s new VR Postcards series that showcase international tourism destinations. Those destinations include a trek through the Andes in Chile, a visit to an ice cream shop in Rwanda and travelling down the busy streets of Beijing.

It’s one of Marriott’s many tools it’s using to connect with what it calls “next generation travelers” — the jet-set millennial crowd.

“Travel expands our minds and helps push our imagination,” said Matthew Carroll, VP, Marriott Hotels in a statement. “VRoom combines storytelling with technology, two things that are important to next generation travelers.”

This isn’t the first time Marriott has experimented with VR. In 2014, Marriott embarked on a traveling campaign titled “#GetTeleported.” The campaign featured large booths set up at different Marriott locations throughout the U.S. where travelers could don a Occulus Rift VR headset and immerse themselves in a VR experience featuring footage from travel destinations around the world.

While VRoom Service may not be a VR first for Marriott, it is something new for Samsung.

VR and 360 technology is gradually being embraced in the gaming industry, filmmakers and even in arts and culture. But VR as a business tool or advertising platform is also creeping into the mainstream. This past summer, YouTube announced it would integrate 360 videos for advertisers, with its first 360 client being Bud Light.

For those who won’t find themselves in New York or London anytime soon, the VR Postcards experiences will be available to the general public through the Samsung Milk VR video service, which anyone with a Samsung Gear VR headset has access to.

No details were provided on the cost associated with VRoom Service.